Born bad or just our bringing-up-kee? (Book - The Changeling by Robin Jenkins) 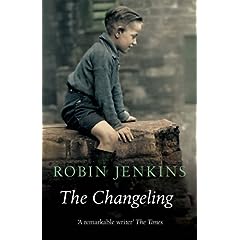 Charles Forbes, a portly Glaswegian school teacher, does more than try to see the best in his clever, poverty-stricken student, Tom Curdie, he decides to take him along on his family's summer holiday and that, in a nutshell, is the story of The Changeling by 20th century Scottish novelist Robin Jenkins. Recommended by Dovegreyreader, I couldn't find this book in the U.S. so I bought it in London while on my trip. Forbes fellow teachers think Curdie is a born thief and that Charles is s mad:

'Good old Charlie. What's biting him now? Last time he was objecting to your unchristian practice of allowing pupils to be strapped who'd forgotten their Bibles.'

'You remember little Curdie? You sent him on to me a year ago.'

'One of my brightest ever.'

'Yes, but would you call him an example of magnanimity and indomitability?'

'Jack, I wouldn't even call myself that if I could get my tongue round them.'

'I don't think I'd even call Charlie that,' he added.

'Curdie's a sly wee rogue though, isn't he?'

'Isn't he just? Have you met his mother?'

His wife feels that Curdie will be a danger to their children:

'He'll not be clean. He'll have lice. He'll swear. He'll lie. He'll have all kinds of disgusting habits.'

But Charlie is determined. If Tom can only be given the advantages of other children he will prove to be at least as good as them if not better, given his superior intelligence.

I enjoy the way Jenkins constructs his characters. Forbes:

Their garden was tiny, which Charlie regretted in theory but welcomed in practice: he was too big in the belly, and too assiduous a planted of exotic hopes, to be zealous in the cultivation of leeks or even gladioli; but he liked to watch Mary plant, weed, mow, and chase neighbours' cats.

Curdie is every inch the sly wee rogue Forbes's colleagues say he is, but not in the way they think. He is brought up in dire poverty in the Glaswegian slums. As his mother is continually drunk, he is often left to procure food for his brother and sister or sing them to sleep. Yes, he steals an apple but his brother is ill and Tom reckons he needs fruit. He even takes one bite out of the apple to give to a dying neighborhood cat, who Jenkins depicts as Tom's comrade - suspicious of kindness, pity rarely shown him, always hungry:

The cat, not much liking apple, was nevertheless eating. He smiled in approval. Never to whine; to accept what came; to wait for better; to take what you could; to let no one, not even yourself, know how near to giving in you were: these were his principles by which he lived, and he honoured them in this old dying cat.

Tom's is unwilling to feel shame for his circumstances. I marvel at his doggedness. Jenkins is good at getting inside Tom's logic.

He was wondering what Forbes's true reason was for so strange an invitation. The teacher had spoken about good food, fresh air, and scenery; he had said they would do Tom good, physically and morally. Tom had understood very well what he had meant, but he could not see what Forbes hoped to get out of it. He knew that Forbes was supposed to be conceited and rather stupid, and that other teachers laughed at him behind his back. Was this invitation then just an act of conceit and stupidity? Or was Forbes really trying to be kind?

Once before Tom had been befriended by a teacher. It was in the Primary. Miss McIntosh, who was always bothering him with kindness, one day brought clothes for him; they had belonged to her young brother. Tom had accepted them, but he had taken them straight after school to a junkshop where the man had given him ninepence for them. Next morning, when Miss McIntosh had whispered why he was not wearing them, he had announced loudly so that all the class would hear, what he had done with them. He had expected her to strike him with her hand or the strap; indeed, he had wanted her to. Instead she had just stood and stared at him, with tears in her eyes. She had not reported him to Mr. Black the headmaster. He had been nine then. Even now he could not forgive her for her pity. She had come hearest to coaxing him to give in.

Jenkins is tackling an interesting moral subject but he consistently maintains a tone just shy of arch. There is a humorous twinkle in his words that keeps the novel from being heavy. I'm nearly half way through and am enjoying it heartily.
Posted by Ted at 6:28 AM