Everybody is into the brain these days. I have had discussions with folks I bump into on line at the supermarket about neurons. But when I first began studying neuroscience, the most common two reactions I received when asked what I did were ‘wow’ and ‘why?’ Today's Science Times has an article Science Times article by Donald G. McNeil Jr. about a new treatment for those with brain injury from a stroke is a good example of what excites me about the field.

It seems that those who suffer from rigid or spasming muscles as the result of brain disease or injury might be able to be treated with Botox. You are probably familiar with Botox' s other life as a face-lift in a syringe. Many people are content to know that its effects are a result of paralyzing the muscles around which it is injected, but given the fact that Botox is a snappy brand name for botulinum – a toxin to the nervous system - I thought I would offer a little information about what it is and how it does its business.

Botulinum is a powerful neurotoxin produced by several different bacteria, most commonly clostridium botulinum - a spore-forming bacterium.  It tends to grow when meat is not properly prepared, but it can affect the preparation of any food as the famous tainted Bon Vivant vichyssoise outbreak in the 1970s showed, (so watch out for swollen, dented or punctured cans when you buy canned food). Home canning improperly handled can be a cause. Botulinum is lethal in very small doses, causing botulism, but it is extremely rare, its symptoms tend to develop slowly, and it is treatable using antitoxins and breathing support. It causes muscle paralysis, eventually of the whole body, but is fatal primarily because it paralyzes the muscles of the respiratory system. Botulinum actually works its magic because it is toxic to the nervous system. 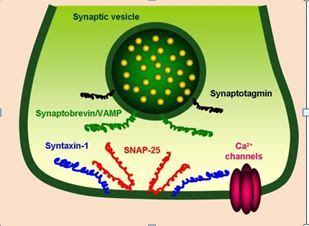 A motor neuron, the kind of nerve cell that signals a muscle cell to contract, does so by releasing the neurotransmitter acetylcholine. Think of this as the neuron’s message to the muscle. It is communicated by packaging the acetylcholine into vesicles, which are covered in a thin membrane, like a little water balloon of chemical. The wall of the neuron is also covered in a membrane and the vesicles travel to the end of the neuron's axon (pictured left), where it is nearest a muscle cell. The vesicle is pushed against the inside of the neuron's membrane and the two membranes fuse, releasing the contents of the vesicle into the space between the nerve cell and the muscle (the synapse), a process called exocytosis. Receptors on the muscle take up the acetylcholine which stimulates the muscle to contract.

The part I really like about how this works is the scale of the system. The neuron is a microscopically small structure, somewhere between 5 and 100 microns long. A single axon terminal, like the one pictured, would not even be 1 micron in width. You could line up 50 whole neurons side by side and they would fit inside the dot over the letter ‘i.’ Inside this one cell it is the equipment to manufacture many different neurotransmitters, the equipment to package neurotransmitters into vesicles, and equipment that functions much like a little train on a track to transport vesicles to the proper spot on the axon terminal. Attached to the membrane of each of the many vesicles in a cell are many proteins, each with a different function. You see some of them labeled in the cartoon drawing above. Many. How can there be many of anything associated with something so small? One of these vesicle membrane proteins called synaptobrevin connects with another protein called SNAP-25 located on the inside of the cell's membrane right next to the location for the vesicle to fuse to the membrane. When everything goes right, synaptobrevin connects to SNAP-25 (assisted by a third protein called syntaxin) bringing the vesicle closer to the membrane so that exocytosis can occur. Botox fits into the story because Botulinum toxins contain proteases – chemicals which disassemble proteins. The three varieties of botulinum toxin A, B, and C each degrade SNAP-25, synaptobrevin, and syntaxin, which prevent the vesicles from docking next to the membrane and releasing acetylcholine, which means the muscle does not get the message to contract.  On the negative side this means paralysis of the muscles that help us move and breathe.  On the positive side, without muscles contracting together our brows, they are free of wrinkles.

Now to the reaction I always get when I say I study neuroscience – ‘why?’ Why should we care to know all this arcane nonsense? What can it do to make life better? Understanding how neurons signal muscle cells has helped us understand how to use carefully controlled amounts of botulinum to paralyze select muscles which can help stroke victims (though this treatment is still not approved), treat strabismus (crossed eyes), blepharospasm (uncontrolled blinking), cervical dystonia (spasms of the head and neck), excessive sweating, cerebral palsy and other spastic disorders, various neuropathies, and of course erase Courtney Cox's and Nicole Kidman's laugh lines. Oops, I probably should not have said that - big industry secret. Now I've done it..
Posted by Ted at 7:33 AM

Email ThisBlogThis!Share to TwitterShare to FacebookShare to Pinterest
Labels: Neuroscience, science and culture