A fabulous New York night yesterday with my fabumanic old friend Shiela. After four hours of neurosicence, I headed down to the East Village to bar KGB, Soviet themed, as it sounds. Old Russian posters on the red, red walls, Baltika beer served in large bottles, and what looked suspiciously like a painting of my favorite film director - Nikita Mikhailkov - (if you haven't seen Anna or Burnt by the Sun, put them on your list!). Anyhoo, we were there for not for the fabulous red wine, nor for the fabulous red atmosphere, but for a reading by Red Hen Press authors which included Ernest Hilbert reading from his accessible and thoughtful Sixty Sonnets, and Timothy Green reading, among other things, his breathless American Fractal, which I loved. There was also a short story from Greg Sanders's Motel Girl about a woman and a bear she rescues from a Moscow circus (appropriately enough) that was touching and memorable. Tapas,more wine, and much conversation followed - a great evening. Thanks Sheila! (You can see pictures over at her place). 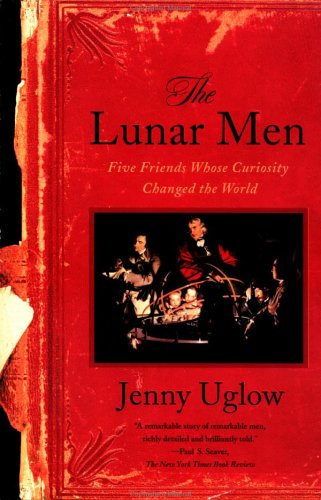 This week has also brought some new reads. From the library come Kissing Doorknobs and Total Constant Order, both YA novels about obsessive compulsive disorder, on which I'm doing a presentation for school. I also received The Lunar Men in the mail. It is by Jenny Uglow and concerns the Lunar Society, a group of experimenters and creative thinkers who met regularly in late 18th Century England. It included James Watt - the inventor of the steam engine, Erasmus Darwin - poet and inventor, and Joseph Priestley - scientist and political and religious radical who I just learned about in Steven Johnson's book The Invention of Air. In fact, it is from that book that I learned about this one, which will probably end up on the summer reading list given what I have to do before the semester is over.

I also picked up and started Will Lavender's Obedience, which is another college campus thriller in the vein of Donna Tartt's The Secret History or Barry McCrea's The First Verse. It concerns a logic class offered as a thought experiment in, well, obedience. Given the frequent mentions of Stanley Milgram, famous for social psychology experiments testing people's willingness to listen to authority, I have a feeling I know where this one is going. I would not describe the writing as long on subtlety, but I bought it for the plot, which does really keep things moving. I also bought a copy of Cynthia Ozick's The Puttermesser Papers. I have only read the occasional short story of Ozick's in The New Yorker. I have never actually read a novel and thought it was high time. Mark Sarvas thinks she's the cats meow, so what more can you ask? And a lovely Persephone Classics edition of Little Boy Lost by Marghanita Laski also caught my eye. I had never heard of Laski or any of her novels, written in the 1950s. I have only sampled a couple of pages, but the story of a lost child in post-war France and the taut writing really have my interest piqued. And finally An Equal Stillness by Francesca Kay, a recommendation of Cornflower Books', and I Haven't Dreamed of Flying for a While by Taichi Yamada, which writer Junot Diaz talked about in a radio interview, are also on their way. An embarrassment of riches.
Posted by Ted at 7:34 AM

All of these books sounds interesting, I haven't read any of them but have been meaning to try Ozick for a while.

I read another excellent YA novel with an OCD protagonist, Zelah Green Queen of Clean by Vanessa Curtis. I thought it was surprisingly good, both sympathetic and funny.

Sarah - Thank you for that recommendation, I will look it up as I have to give a presentation on OCD in May.

I love that top photo! I've read Marghanita Laski before (a short story and a short novel),and she's very good. I love those new Persephones, too!

Danielle - I'm really taken with Laski's writing and this story!