Contemplating killing and future reading (Books - Brilliance of the Moon) 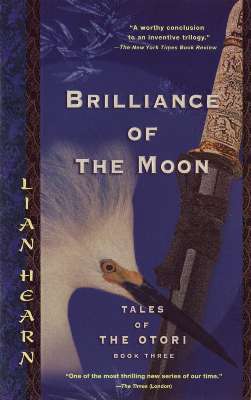 I have finished what I thought was Lian Hearn's Tales of the Otori TRILOGY but, having discovered that there is now a fourth book, I have ordered it and am waiting for my copy to arrive. As it stands the series was heartily satisfying, thanks Imani, and it satisfied on many levels - romance, adventure, history, fantasy, and battle. In the first book I was really enjoying the theme of the outsider, one that always appeals to me. This book did it justice in a way that wasn't cliched. In book three I was very much taken by the questions the central characters were forced to ask themselves about personal and collective responsibility - especially as it relates to acts of violence - whether isolated or as acts of war. I found the book particularly thoughtful on this subject without being labored or hackneyed.

Only the chroniclers writing afterward can tell you what happens in battle, and then they usually tell only the tale of the victor. There is no way of knowing when you are locked in the midst of it which way the fighting is going. Even if you could see it from above, with eagle's eyes, all you would see would be a quilt of pulsating color, crests and banners, blood and steel - beautiful and nightmarish. All men on the battlefield go mad: How else could we do the things we do and bear to see the things we see?

The series doesn't really need a follow up, but I'm happy to read one given how compelling the writing and addictive the story.

I've been clearing the decks as classes have begun, but I still need a book. Tonight I'm going to sit in bed with a few and try to choose one. It's between:
Among The Russians by Colin Thurbron about traveling through the country in the last 25 years one of my Russian Lit Challenge selections
Heat and Dust by Ruth Prawer Jhabvala or The God of Small Things by Arundhati Roy - both on my Booker Challenge list
Moonheart by Charles de Lint, a so called urban fantatsist who I enjoy every now and then
The Last Life by Claire Messud, I had really loved The Emperor's Children so this has been sitting on the pile for a bit.

You're very welcome! :) However, I can't swear for the fourth book. Like you I didn't think the trilogy really needed an extra book and so have been reluctant to try the fourth in case it ends less gloriously. It will be interesting to read what you have to say about it if you get around to it some time.

I tried The God of Small Things a couple times but couldn't snap into the novel for some reasons. But I didn't get rid of the book so I'm waiting for the right time.