Drink Your Wine (Theater - The Bacchae) 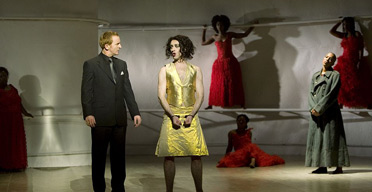 Do not cross Dionysus - he's the Greek god of revelry, of wildness, of wine - that's the advice of Euripides' 2400-year-old play The Bacchae. The Greeks created mythical beings who represented various aspects of nature (and I include us in nature). In this play Dionysus is crossed by Pentheus, prince of Thebes. Pentheus is upset by the revels of the Maenads, the wild dancing women who accompany the god everywhere, and so he attempts to imprison Dionysus. But Dionysus, being a god, cannot be held. In the end, not only do Pentheus's mother, aunts, and grandfather dance in the mountains with the cult of Dionysus while wine and milk spring from the ground, but Dionysus exacts his revenge by driving the revelers to tear Pentheus to bits. His own mother impales his head on a pike as a trophy, imagining it to be a mountain lion.

A program article by Simon Goldhill describes The Bacchae as

...show[ing] how the forces of sexuality, violence, and irrationality can undermine society's most chrished commitments and offers a dark, lurid, and seductive image of the fragility of civilization.

but I don't think that is the whole picture. In fact, I don't think the play only portrays these forces as negative. Sexuality, violence, irrationality are parts of us to be understood, respected and to be given some play - even celebrated, lest we become unable to deal with them and when they burst forth take us over entirely. That, I think, is what is meant by the notion that we should respect Dionysus. If we don't respect those parts of us which need to revel, to dance, to go a little crazy once in a while, if we fear them, if we control them too much, if we deny in fact that they are a part of us - they will explode despite us and rage out of control, which will end in tragedy as this play does.

I have seen two productions of this play in the past year, one at the Experimental Theater Wing at NYU directed by my friend Kevin Kuhlke, and this production by the National Theatre of Scotland featuring a new translation by David Greig and directed by John Tiffany and featuring Alan Cumming as Dionysus, part of this summer's Lincoln Center Festival. The NYU production was very raw, with a marvelously contemporary translation and really great modern music. This production's text is contemporary and colloquial and yet also poetry - I liked the version a lot. Alan Cumming ate the poetry, reveling in his burr to make its speaking full of juice. His physical appearance - he is a god, so he may choose his form - was full-out androgynous human, as you can see in the above photograph. Male, but also female - feminine and sexual but also tough and muscular, his body wide open. Cal MacAninch played Pentheus as all wire and outrage. The highlight of the cast to my mind was Paola Dionisotti as Pentheus's mother Agave. She hurled herself into the revelry with complete abandoned passion and then broke into tiny vulnerable pieces when she realized she had killed her own son. Lovely performance. There was a lot that was good in this production but I took issue with the choice this production made regarding the Bacchae themselves. The NYU production used raw, intense, throaty music in the bodies of the young women who are their students. Here the chorus were all adult women. They were a talented and spirited bunch - coming in all shapes and sizes and they moved really well - but the music and dance created for the production was a gospel-y soul. This could have worked if its performance had had more guts, more, well, soul, but it felt more like I was watching a Vegas Motown medley. Nothing about the work lacked talent it just felt very controlled, very elegant - the opposite of what I wanted the music to evoke in a production of The Bacchae. There was one dance to show us the maenads in their revelry that really had some guts, but sadly only one. I think this production made a choice, both in the casting of Alan Cumming - who is great but who is directed to play a very entertaining Dionysus - and in the use of a very commercial, familiar, and appealing musical idiom - to make friends with the audience. The choice of playing us up, first with god as comedian, and then with Bacchae-as-Dreamgirls was to put us in the role of one who will find the god appealing, enticing, entertaining. We should feel ourselves want to be one of them. It's an interesting choice - but I think the script plays more with a tension of wanting our complicity, our involvement, but also our distance - that's the advantage of having a chorus narrate and delivering the most terrible events by messenger. I never felt the fear and excitement of what was to happen to Pentheus before it happened as I did in seeing a rehearsal at NYU without any set. My heart pounded in anticipation of what I knew was going to happen, even while Pentheus did not. Here I was skillfully entertained, but I only felt the impact of what happened afterward, through the fine performance of Agave. I finally put aside this objection so that I could enjoy the rest of the production, for it did have a lot to offer. I enjoyed the fact that the women of the chorus also played smaller roles of soldiers and the messenger who reports on the murder of Pentheus - the messenger is always a difficult role as it must make drama of events we don't ever see. Hazel Holder handled it beautifully and the physical work of the other Bacchae really added to my experience of the narration.
Posted by Ted at 6:59 AM