THE FEDERALIST PAPERS PROJECT - A Commitment to Deep Thinking About our Political Origins in the Presence of Noise (Intro and Paper No. 1) 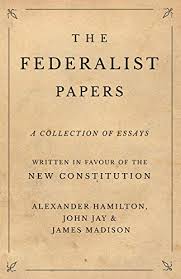 It has been ages since I have written here, let alone created a series, I fear that I may be out of practice. Back in 2007, I visited a poem every Friday in a series called An Inflorescence. That originated from a hankering to read and think about a form that would counter the statistical and scientific material that I was spending time with while earning a PhD in neuroscience. Similarly, this series is born out of a need to change the channel.

The clamor of politics these days is reactive, ugly, and lacks the space for reflection on or reference to our political and philosophical underpinnings. Well, nobody is going to do it for me, I thought.  What would I read to counter the noise?  My choice was a return to a 'classic,' that is a work that has been judged to be of established value, and that was essential to our origins as a body politic.

The Federalist Papers were written in 1787-88 by three founders of the United States government, Alexander Hamilton, James Madison, and John Jay, under the joint pseudonym of Publius. They were published in three New York newspapers the Independent Journal, New York Packet, and The Daily Advertiser.  The Federalist Papers are a collection of 85 arguments to the people of New York State that the Articles of Confederation, the original U.S. government charter, quickly written during wartime in 1777, was insufficient in granting the Federal government the authority that it required to govern.  The papers advocated for the ratification of the newly written Constitution that proposed, among other things, the establishment of a federal government with executive, legislative, and judicial branches, and conferred upon that government the ability to levy taxes and regulate commerce.

Proposition:  With 85 essays, most of them brief, reading about one per day skipping a few upcoming holidays, we should be able to get through them by inauguration day.  I don't know about you, but I need a project that helps focus me on the original positive purpose for the establishment of these united states, that reminds me of the value inherent in a "government of laws and not of men," and that is on-going through what is left of the campaign, the election, and its results.  I invite you to read along with me and share your thoughts in the comments.  This links the full text of The Federalist Papers freely available on line- thank you Project Gutenberg.

Caveat:  Please be warned, this is my blog. I write what I think here. I am issuing an invitation for reflection on and engagement with a classic work.  This is a space for civil discourse, and what is civil is determined by me.  If your comments are false, excessively whiny, or unkind I will delete them.

And with the housekeeping out of the way, let's start with Hamilton's first essay.

...it seems to have been reserved to the people of this country, by their conduct and example, to decide the important question, whether societies of men are really capable or not, of establishing good government from reflection and choice, or whether they are forever destined to depend, for their political constitutions, on accident and force. If there by any truth in the remark, the crisis, at which we are arrived, may with propriety be regarded as the era in which that decision is to be made; and a wrong election of the part we shall act, may, in this view, deserve to be considered as the general misfortune of mankind.

It is striking how seriously Hamilton takes the responsibility of the ratification process towards the future. One must wonder what he would think of the ability of our present society to embody good government, but his point here, I believe, is whether imperfect people can create a government that is better than they are.

It is notable, too, that he begins his consideration not with the arguments for, but instead with the obstacles to passage of the new Constitution:

the obvious interest of a certain class of men in every State to resist all changes which may hazard a diminution of the power, emolument and consequence of the office they hold...  and the perverted ambition of another class of men, who will either hope to aggrandise themselves by the confusions of their country...

Time and writing styles have changed, but apparently "men" have not, a strangely comforting thought. Blaming men, Hamilton continues, for their biases is a dishonest point of view. These men likely have honorable intentions and are simply making "errors of mind led astray by preconceived jealousies and fears."  There are so many reasons that a "wise and good man" can be wrong, he essentially writes. How elegant to apparently argue your opponent's honor, attributing his opposition only to misunderstanding, and to uncertainty that those who "advocate the truth" aren't motivated by greed, personal hatred or party politics. He paves the way for the role of the essays that will follow in attributing to his opponents the possibility of being influenced by them.

nothing could be more illjudged than that intolerant spirit, which has, at all times, characterised political parties... they will mutually hope to evince the justness of their opinions, and to increase the number of their converts by the loudness of their declamations, and by the bitterness of their invectives.

Ratification in this context is about agreeing to a system of government with centralized powers, something still objected to by some today. Hamilton here makes his point of view clear:

The vigour of government is essential to the security of liberty...

I hope that I will have some reading companions to accompany me on this journey.  Assuming that I do, what were your thoughts on reading the first paper?