THE FEDERALIST PAPERS PROJECT - A Commitment to Deep Thinking About our Political Origins in the Presence of Noise (Papers Nos. 2 & 3) 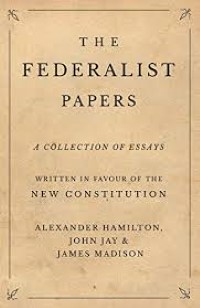 Welcome back to THE FEDERALIST PAPERS PROJECT, a read-along challenge with the aim of focusing attention during the lead-up and aftermath to the 2020 U.S. election on something more essential than the mess that currently passes for politics.  Here is a link to Project Gutenberg's free source edition of The Federalist Papers.

Papers numbers two and three were both written by John Jay.  Jay served many roles in the formative days of the United States - he was a delegate to the Continental Congress, President of the Continental Congress, Secretary of State and of Foreign Affairs for President Washington, Governor of New York, and is probably best known for being the first Chief Justice of the Supreme Court. He was known to have written only papers numbers two through five.

Nothing is more certain than the indispensable necessity of Government, and it is equally undeniable, that whenever and however it is instituted, the people must cede to it some of their natural rights, in order to vest it with requisite powers.

It's worth remembering that the American Constitution did establish federalism, because the states did ultimately ratify it. This is what we signed up for and yet today candidates regularly run for federal office on "anti-government" platforms.  Jay writes that the plan is "recommended not imposed," he submits it for the voters "sedate and candid consideration," but concedes that such consideration is "more to be wished than expected."  It seems is that the voters of his day may have been, shall we say, as driven by passion and impulse as are some of our own.

Jay lays out the decision to be made by the voters of the time: do we look to the states to be the separate guarantors of our safety and prosperity, or do we confer that ultimate power on a consolidated union?

His arguments for Federalism begin with his observation that the landscape is physically undivided, as if to say, if god wanted it divided, he would have made it that way.  He shares his belief that "Providence" not only made land and rivers of beauty and usefulness, but that he gave them:

to one united people, a people descended from the same ancestors, speaking the same language, professing the same religion, attached to the same principles of government...This country and this people seem to have been made for each other...

My reaction to this is two-fold.  On one hand, I feel disgust at the assumption that this land was made explicitly and exclusively for people only like himself. It was not made for the natives who inhabited it for thousands of years prior to his ancestors' arrival, nor for the Portuguese who settled it in the 16th Century, nor for the Africans who were dragged here against their will. The blithe certainty with which he writes could only be born of religion, which seems to breed certainty when humility would be more appropriate.  One doesn't have to look very far to see the descendants of this sort of opinion in the United States of today. When he claims that "we have uniformly been one people...every where enjoying the same national rights, privileges, and protection," I can only hear the delusion of someone who believes that their own experience must be everyone's.

On the other hand, I am struck by his love for the physical attributes of America as a land. I wish that this appreciation of its beauty and bounty was a more influential priority in people who serve in office today.

In Paper No. 3, Jay argues that a centralized government affords better security against threats from "foreign arms and influence" than do separate states or confederacies. Jay does not consider so much our defense against others via arms, he first addresses whether it is a United or disunited America that itself is likely to invite war because of violation of treaties or outright violence. Imagine, he so values peace that he first considers whether America is more likely to observe our responsibilities towards other nations. He notes that in mediating questions of the treaties between nations, this will be more efficiently, consistently, and dispassionately accomplished by a central government than by multiple entities, where one or the other may have distinct interests. Should it come to war for a just cause, he argues, a national government will afford more robust security. Lastly, a national body will have the widest choice of expertise and talent.

What do you take away from Papers 2 and 3?

And in case you missed it, here is a link to my post of Paper 1.