THE FEDERALIST PAPERS PROJECT - A Commitment to Deep Thinking About Our Political Origins in the Presence of Noise (Paper No. 14) 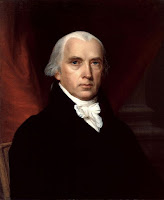 We have seen the necessity of the union as our bulwark against foreign danger, as the conservator of peace among ourselves, as the guardian of commerce and other common interests, as the only substitute for those military establishments which have subverted the liberties of the old world; and as the proper antidote for the diseases of faction, which have proved fatal to other popular governments, and of which have been betrayed by our own.

So, what argument remains? James Madison is not yet done in refuting the objection to union that republics are only effective in governing a small number of people living within a restricted region. Not so, he claims. That is only true of a democracy, in which people must assemble themselves to administer their government, whereas republics assign that duty to representatives.

Europe has created a mechanism of representation, Madison acknowledges, but within the context of a monarchy, so not within a government controlled by the people.  Governments in antiquity were populist, but small.  America is the innovator of a popular government, but within separate republics. Why not let the experiment go all the way, he asks, and allow for the comprehensivness of a central government functioning representatively?

It can work.  It won't be that bad, he seems to say.   Just remember, this government won't decide everything.  It will make and execute laws only concerning shared mattters. States will retain authority over everything else. Travel among the distant parts of the union will be improved. And, Madison reminds his readers, nearly every State borders on a frontier. This means that they adjoin a foreign nation and may at times need to defend themselves.

It may be inconvenient for Georgia or the States forming our western or north eastern borders to send their representatives to the seat of government, but they would find it more so to struggle alone against an invading enemy...

Hearken not to the unnatural voice which tells you that the people of America...can no longer continue the mutual guardians of their mutual happiness; can no longer be fellow citizens of one great respectable and flourishing empire. Hearken not to the voice which petulantly tells you that the form of government recommended for your adoption is a novelty in the political world; that it has never yet had a place in the theories of the wildest projectors, that it rashly attempts what it is impossible to accomplish... Why is the experiment of an extended republic to be rejected merely because it may comprise what is new?

Here is that idea of America as a "great experiment."  Awwww come on guys, says Madison, it'll be cool.  He's like a teenager trying to get his date to go all the way.  Really, Madison's argument in Paper No 14 boils down to the fact that he wants to be an innovator and he sees the possibility of a legacy - ever the motivator.

Is it not the glory of the people of America, that whilst they have paid a decent regard to the opinions of former times and other nations, they have not suffered a blind veneration for antiquity, for custom, or for names, to overrule the suggestions of their own good sense...to this manly spirit, posterity will be indebted for the possession, and the world for the example of the numerous innovations displayed on the American theatre, in favor of private rights, and public happiness.

And finally, if it isn't perfect, we thought of that too! There is a way for "successors to improve and perpetuate" it. With all the recent talk of eliminating the electoral college, the subject of later Papers, I have to wonder if we the people will ever decide to "improve" our mode of representation in the electoral process.  And the experiment continues...