THE FEDERALIST PAPERS PROJECT - A Commitment to Deep Thinking About Political Origins in the Presence of Noise (Paper No. 16) 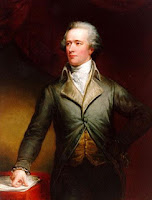 As the election count continues unresolved today, political writers observe that we are polarized.  We are two Americas, one wrote this morning - ya think? The split is embodied by what could end up being tied party representation in the Senate. Any tied vote will be broken by the Vice President, as yet unknown, according to Article I, Section 3, Clause 4 of the Constitution so avidly advanced in The Federalist Papers. In fact, in Paper No. 16 Alexander Hamilton writes about the disadvantages of splitting the Union into smaller confederacies.  Read along here: Project Gutenberg's free source edition of The Federalist Papers.

Hamilton gets on a hyperbolic horse with this paper; something we so rarely see in politics today. Confederacies are the parent of anarchy, he writes, and when the components of the Union don't fall in line the only remedy is to use force. Apparently, Donald Trump and William Barr may have read Paper No. 16, as discussed in Episode 7.

If there should not be a large army, constantly at the disposal of the national government, it would either not be able to employ force at all, or when this could be done, it would amount to a war between different parts of the confederacy.

Those on one side of the argument would unite in defense, Hamilton predicts, and individual states would take sides against each other!

Specious arguments of danger to the common liberty could easily be contrived; plausible excuses for the deficiencies of the party, could, without difficulty be invented, to alarm the apprehensions, inflame the passions, and conciliate the good will even of those States which were not chargeable with any violation, or omission of duty.

Thank goodness we ratified the Constitution so that we could avoid such calamity. Hamilton continues:

This would be the more likely to take place, as the delinquencies of the larger members might be expected sometimes to proceed from an ambitious premeditation in their rules, with a view to getting rid of all external controul upon their designs of personal aggrandizement...

Well, you can't say that they didn't see it coming.

When the sword is once drawn, the passions of men observe no bounds of moderation. The suggestions of wounded pride, the instigations of irritated resentment, would be apt to carry the States, against which the arms of the Union were exerted to any extremes necessary to revenge the affront, or to avoid the disgrace of submission...This may be considered as the violent death of the confederacy...if the federal system be not speedily renovated in a more substantial form.

The alternative to regulation by force would be empowering a federal government to act on behalf of shared need for safety and happiness, without intervention from the state legislature, an agreement that its citizens will submit to the powers of a federal civil officer to effect justice.

The shame is that those elected to serve the public by serving the Constitution in our time, have engaged in the willful dismemberment of our union - the mechanism of laws and processes put into place to avoid the use of military force - reverting our country effectively to two confederacies.  The bond is broken.