Corrupted innocence and a lifetime of longing (Books - The Go-Between by L. P. Hartley) 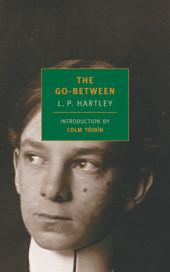 This post along with this one constitute my review of The Go-Between by L. P. Hartley.

Leo Colston is the only child of a middle-class widow. About to turn a very green thirteen, he spends a very hot summer vacation in the well-staffed home of a wealthier, more worldly school chum. He is eager to succeed in this unfamiliar world and it charmed into becoming the messenger between his friend's older sister and a local farmer, even while she is engaged to a viscount. The narrator's voice is an interesting one, because it teeters precariously and completely successfully between the worlds of his summer childhood of 1900 and his life fifty years later. This later voice darkly colored by the submerged memory of that time. Hartley maintains the knowledge and a deep regret of an adult held back by something he cannot quite remember, along with the innocence of the child - quick to fantasize, quick to crush, desperate to know and be part of the secret society of adults. He finds the music of Leo's inner child voice without condescension and moves handily between that voice and the later perspective without making much noise about it. The adult suddenly finds himself in that world again, led there by a childhood diary and now able to remember, he does and discovers who he has been all these years.

I just watched Alan Bennett's beautiful The History Boys this weekend, another story of childhood turning to adulthood, and adults who live with intelligence as a stand-in for the passion they cannot bring themselves to live out in their lives. In the case of The History Boys, set twenty-five years ago, the homosexuality of several of its characters is expected to live out its days quietly unrequited, if ever fulfilled it is expected to be in secret, if ever not in secret it is condemned for its blatancy, its flagrancy, its offense. Homosexuals became professionals at doing longing (although we are by no means the only ones to actually be unfulfilled, it is just that we were expected to be so to be acceptable to others. It was a way to be open without being troublesome, to be useful, even to be honored sideways). I found my own knowledge that Alan Bennett the writer and Nicholas Hytner the director are both gay, both living openly, both flagrantly successful a welcome post-script to a story I would have otherwise found tragic. What a difference twenty-five years makes.

In the case of Leo in The Go-Between, he was expected to be a messenger because he was a child, also he was of a lower class than his summer hosts and not expected to refuse. Leo became party to doing something thought wrong by this society he wanted to be part of. Unable to comprehend sexuality and yet beginning to feel it, he was both unequipped to make his own judgment and drawn to be a part of the events. So he became immoral in the eyes of this society into which he was thrust. This all happened as he was trying to create his own identity - to learn who he was. A time when one can be made or one can be broken. Was he like the admired Viscount, with his easy-going aristocratic license, his sturdy lineage. Or was he more taken by the farmer - with his strength, his awkwardness, his self-sufficiency, his blatant rage? What kinds of values should drive his future actions? The summer's events are indeed formative for him. I was not surprised to find out from Colm Toibin's introduction that the author, L. P. Hartley, was homosexual. Although that is not the subject of this story, the tale of corrupted innocence and an adult life suffused with longing was familiar.

There is a 1970 film adaptation by Harold Pinter directed by Joseph Losey that stars Julie Christie and Alan Bates that I now very much would like to see. The way in which the writing flowed in and out of the narrator's present and past and the internal dialogue resulting from events which could have otherwise have been quite small was highly cinematic. I am interested to see what kind of voice Pinter finds for this story.
Posted by Ted at 9:31 AM

The notion of corrupted innocence does play well very well in this novel, which is one of my beloved reads in 2007. The narrative voice is unique. He's below the society of his host. But written between the lines of the book, one might perceive that it is not really about class or English society, or a lost world mourned by Hartley, instead it’s about the boy’s own sensuous nature going blindly amiss toward some emotional collapse impelled by his intensity of feeling and innocence.

Matt - This book was a great recommendation - thanks! I don't really see the novel as about English society, even though class is a part of that. I think class in the novel is more about Leo's experience of "otherness." I couldn't agree more about his sensuousness bumbling in the dark, but he is innocent of the power of his own feelings and the power of the two lovers' feelings as well. I do think that they used him to achieve their own ends, using his feelings to force him to make a choice that had moral consequences he could not understand and, as such, they corrupted him.

I think the film is well worth seeing - seem to remember you liked Sunday Bloody Sunday. If so, I'm sure hyou would enjoy The Go Between. Bates' performance is excellent.

This is probably one of the best books I've read in 2008--and the year's just a little more than halfway over.