A chinese box of a revenge novel, with footnotes (Books - The Meaning of Night by Michael Cox) 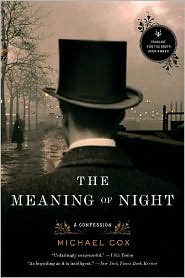 Michael Cox's The Meaning of Night is one of those books that invites comparisons. Maybe that's because it delights in playing with form, in this case the 19th century English saga of love, intrigue, and revenge. From the pages and pages of review quotes, critics also seemed to think so - Trollope, the Brontes, Wilikie Collins, Charles Dickens - I'll add two more to that list - Donna Tartt and Dostoyevski. Dostoyevski, and in particular, Crime and Punishment, because if this is a story of anything, it is a story of obsession. Our author is so dedicated to avenging the wrongs done him by his mortal enemy, that the first pages are devoted to an act of senseless murder that is a rehearsal for the eventual real one. The anonymous author's identity, we discover, is buried beneath layers of obfuscation aided by Cox's Chinese box structure for this book. As I wrote in my last post, the story is couched as an anonymous confession, written in the 1850s but discovered in 1948. It features a 'copy' of the original title page, an 'introduction' by an academic authority on Victoriana, and the story is liberally footnoted. The revenge our author seeks is against an old school chum who is, in the present day of the manuscript, a famous writer. This gives Cox the additional pleasure of providing some of the backstory of the relationship between our narrator and his erstwhile friend in the form of a memoir written by this friend. So while the first part of the book is by our narrator about the friend, we now peel back a layer and are offered a chapter about our narrator written by the friend. Supposedly. If we trust our narrator's sanity, and at this point I am beginning to doubt it. As our narrator says:

The boundaries of this world are forever shifting - from day to night, joy to sorrow, love to hate, and from life itself to death; and who can say at what moment we may suddenly cross over the border, from one state of existence to another, like heat applied to some flammable substance? I have been given my own ever-changing margins, across which I move, continually and hungrily, like a migrating animal. Now civilized, now untamed; now responsive to decency and human concern, now viciously attuned to the darkest of desires.

That is a pretty fair description of our narrator's state of mind, and our's if Cox is getting his way with us. His game is creating a delicious puzzle of read. Take this paragraph immediately following the manuscript by said writer/enemy/friend and future victim:

A touching account, is it not? And I am naturally sensible of the encomia that he has seen fit to bestow on me. We were friends for a time: I acknowledge it. But he come the litterateur too much - seeing significance where none existed, making much of nothing, dramatizing the mundane: the usual faults of the professional scribbler. This is memory scrubbed and dressed up for public consumption. Worse, he exaggerates our intimacy, and his claims on the matter of our respective intellectual characters are also false, for I was the careful scholar, he the gifted dabbler.

This playful little game is the aspect of the book that reminds me of Donna Tartt, that and the fact that it is keeping me up nights. This is the first book I have read in a while which creates in me that need to read just one more page, and then just the next chapter, and then next. I am nearly 200 pages in now, and more than 100 of them I read last night. The night before an exam on synaptic modulation by second messengers. What was I thinking?
Posted by Ted at 6:56 AM

I LOVE this novel! This is definitely the kind of novel that makes you forget about everything you have to do, so that when you're finally forced to tear yourself away, you look up and realize that you're not, in fact, in the 19th century any more.

You and Katherine have sold me on this one - a title I knew nothing about just five minutes ago.

Thanks to you both.