I have some interesting new reads on the horizon: 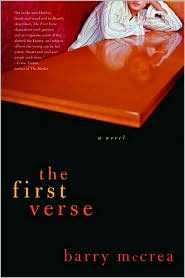 Irishman Barry McCrea has written a literary coming-of-age novel set at Trinity College in contemporary cosmopolitan Dublin called The First Verse. A gay student is lured into a cult like world of obsessive literary mysticism, as an escape from the workaday world "of strange games and secret systems," as he and his friends discover who they are and what kind of life they would like to create for themselves. The writing seems fluid and elegant and the plot very engaging. An enticing recommendation from Eve's Alexandria.

I have tended to be more a fan of Neil Gaiman's books for younger readers than his books for adults despite his prodigious imagination. I enjoyed Coraline way more than Neverwhere, which I couldn't even finish. So when Dewey went on enthusiastically about The Graveyard Book, I decided I'd give it a try. I always like to read at least one YA adventure over the winter break and a child raised by the spirits of a graveyard sounds just the thing. I heard about The Scientific Life - about the practice of contemporary science and from whence it came - at Books, Inq. Here is an in-depth interview with the author, Steven Shapin, from University of Chicago Press's website which will give you a much richer idea of this book's contents. Even the book jacket quotes are dense paragraphs in small print. No sound bites here. The journey from philosophy to research to entrepreneurship. I don't remember where I read about it, but Travis Holland's The Archivists's Story is a fictionalized story about the last days of Isaac Babel, the author of Red Cavalry, which I am reading right now. Babel is in Stalin's Lubyanka prison, soon to have his final writing 'purged' by archivist Pavel Dubrov. I don't how much of this story is true. I do know that many of the stories in Red Cavalry were published in magazines when they were written in the 1920s, but there may be other writings, or perhaps this author imagines that there may have been but we will never get to read them. But this is historical fiction set in Stalin's Russia and I'm a Russian history geek, even though I have been neglecting that interest lately. So I thought I would give it a go.
Posted by Ted at 7:15 AM