Mishmash (Books - David's Revenge, The Manual of Detection, The Nice and the Good, and The Mind of a Mnemonist) I haven't been sticking to any one book lately, so this is going to be a mishmash-post. I have continued reading David's Revenge by Hans Werner Kettenbach and marketed on the cover, unfortunately, as a "terrifying novel from a leading thriller writer." It concerns the visit of a Soviet Georgian man to a German school teacher's home, I do a complete plot set-up here. It's a pity it was pitched as a thriller, because that may have given me false expectations. The book is clearly playing with interesting themes of racial and nationalist politics, the relationship between immigrants and their host culture, and what happens to one man's cherished liberal beliefs when he feel threatened in his own home, but that threat is more intellectual than it is physical. I kept waiting as I read for the intense level of tension that I associate with a thriller to kick in. It didn't. Half-way through, I feel like I know exactly where the plot is heading and I find the writing clumsy and so have lost interest. I'm going to abandon this one.

The Manual of Detection by Jedediah Berry continues with its playfully childish tone and its surrealist set-design, it is more of an amuse-bouche than a serious meal and its entertaining but I never want too big a portion. I finally gave in and started Iris Murdoch's The Nice and the Good. She is one of my favorite writers and I wanted something substantial but amusing and that is exactly what she usually delivers. This book actually flirts with the mystery genre as well, a first in my experience of Murdoch's many books, but with her usual eye for detail and head for philosophical resonance:

A head of department, working quietly in his room in Whitehall on a summer afternoon, is not accustomed to being disturbed by the nearby and indubitable sound of a revolver shot.

At one moment a lazy fat man, a perfect sphere his loving wife called him, his name Octavian Gray, was slowly writing a witty sentence in a neat tiny hand upon creamy official paper while he inhaled from his breath the pleasant sleepy smell of an excellent lunch-time burgundy. Then came the shot

Octavian noticed the neatness of the recently clipped grey hair upon the warm vulnerable neck. He had an impulse to touch it, to touch the material of Radeechy's jacket, to pulp it timidly, curiously. Here were the assembled parts of a human being, its clothes and carnal paraphernalia. The mystery appalled him of the withdrawal of life, the sudden disintegration of the living man into parts, pieces stuff. Radeechy, who muffed most things had not muffed this.

I'm looking forward to my first Murdoch in a while and am glad Cornflower Books has ended up choosing it for the August book club. 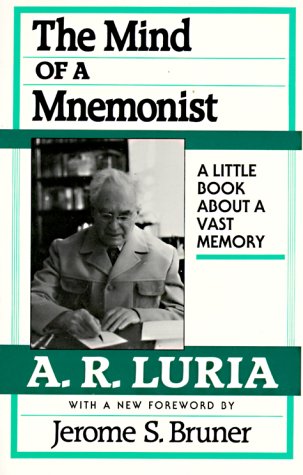 Finally, having read A. R. Luria's The Man with the Shattered World earlier this summer, I was tempted to read his other "neurological novel" called The Mind of a Mnemonist: A Little Book about a Vast Memory. I actually found a copy sitting around my lab this week, so I borrowed it. It concerns a famous patient of Luria's whose curious condition gave him an unlimited memory as well as synesthesia. Synesthetics regularly merge information from one sense with information from another sense, even though the second sensation is not actually part of the stimulus in nature. Say, every time they see a shape it is accompanied by a taste or every time they read a letter it is a certain color (even though all the ink is actually black). Luria's writing about his famous patients is fascinating.
Posted by Ted at 8:17 AM