Leos Janacek, the early 20th century Czech composer wrote music of a distinctive lyrical angularity. The pieces generally have an off-kilter, often hesitant rhythm, yet can be suffused with longing at some times and a sweet simplicity at others. His nine operas are no less idiosyncratic, setting unusual material such as the story of a fox serialized in drawings and stories in a local newspaper (Cunning Little Vixen), a play about an inheritance by Karel Capek that concerns a 300-year-old opera diva (The Makropulos Case), or The Excursions of Mr. Broucek, who travels in the opera's first act to the moon and in its second to 15th century Prague. His music was deeply informed by the folklore of Moravia, which he researched throughout his life. He meant his operas and songs not to force the texts to be subservient to his music but rather, he wrote his music to the rhythm and prosody of the Czech language. 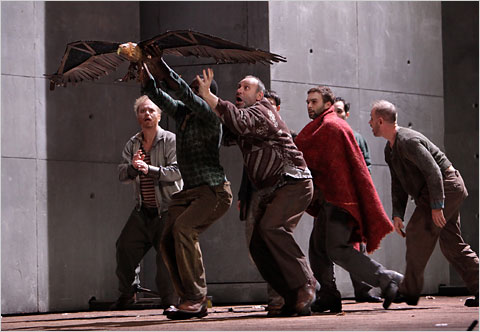 I was delighted that the Metropolitan Opera finally mounted a new production by the sometimes controversial French director Patrice Chereau of Janacek's last and rarely done opera From the House of the Dead. It is based on Dostoevsky's writings about life in a Siberian prison in the 1860s. There is no story per se, it is rather an atmosphere piece in which the rituals of daily life, the resignation, and occasional flights of hope of the prisoners are chronicled. The story is not linear but the prisoners share their lives with each other through narratives and raunchy sketches for entertainment and these have a more traditional linear backbone if one needs a such a structure on which to hang ones hat, and clearly some of the mystified Met audience did. Chareau found a wonderful balance between evoking the sameness, the bleakness of vision of the place, the energy of a community whose members help keep each other alive, and the stories of the individuals who make up this community - who they loved and are loved by - each given dignity through these stories. There is the wonderful friendship that develops between Gorianchikov - a gentleman prisoner - and the youngest prisoner - Alyeya - whom Gorinchikov teaches to read. Particularly poignant is the story of Shishkov, set as a 20-minutes monologue by Janacek, and brought to vivid life in the richly played performance of Peter Mattei. Conductor Esa-Pekka Salonen and the Met orchestra found an almost romantic richness to the music; the overture is a stunner. Set designer Richard Peduzzi created a concrete box with moving walls that is always a prison, but could be a prison anywhere and at any time. It has a hulking and domineering character at some moments and a tight claustrophobic one at others. 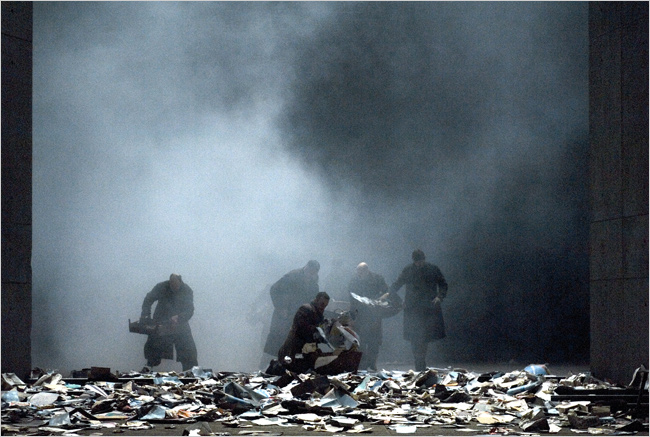 I particularly loved the opening of the second act, which transforms the space by dumping thousands of torn books on the stage - they produce a sound like a single, catastrophic explosion, dust flying everywhere and then the prisoners emerge through this cloud of dust doing their punitive work. I found this image multi-layered and evocative of, on the one hand, the futility of their work, and on another the laying to waste of words, of ideas, and of law. The futility was expressed in the instantaneousness of the mess. A mess simply made so that they might clean it up. And, if they ever get through the mountain of trash, a new load would simply be dumped there so that they may start over again. The mess was one of books, of text, as if to express the laying to waste of individual narrative, of the record of humanity, of ideas, and also of the law. Prisons express the ultimate failure of civilization, whether the culture is democratic or totalitarian, and whether the crimes committed are genuine psychopathic outrages or crimes of the expression of ideas that should not be crimes at all. We can scream all we want about the indecency of someone's crime, political disagreement, or fatal mistake but, when we take away someone's humanity we lessen our own. We may convince ourselves that it is less heinous when we feel sure of the seriousness of the crime and I am not beneath feeling jail is the proper place for people who have done certain things, but I do not pretend that this is civil or loving impulse or that it solves the problem of crime. This production documents the life of unjust imprisonment anywhere and in any age and simultaneously celebrates the humanity of those individuals lost inside. It also gives an important and little-produced 20th century piece of music-theatre a deserved and sensitive production that is beautiful to look at and listen to. I hope the Met brings it back in future seasons.
Posted by Ted at 7:41 AM