Absolution or reconsiliation? (Books - At the Bottom of Everything by Ben Dolnick)

I've noticed that whenever I tell the story of going to look for Thomas (all it takes is a couple of beers, like quarters into a jukebox), at some point whoever I'm talking to will say two things:

2) How could you just pick up and leave like that?

I was nothing like a good friend, and I could only pick up and leave like that because the thing I was picking up and leaving was no longer, in any recognizable sense, a life.  But I don't say this.  My conversation self, the one I send out to bars and parties and weddings, is a half-truth-spouting machine. Here I'll try to do better.

I'd spend the last couple of years (really the years since I was fifteen) ignoring the fact that Thomas needed me, as if his life were a flashing Check Engine light in the corner of my dashboard....

I enjoy stories that use the act of story telling as their artistic device.  It's an invitation to the truth, and there's something fitting about this artifice in Ben Dolnick's plainly voiced first-person confessional narrative in At the Bottom of Everything.  This is a classic novel of a close male friendship that grows apart as the friends age.  For Kings and Planets, Narcissus and Goldmund, and Brideshead Revisited all fall into this classic category, which evokes for me a certain nostalgia, but each is  also a tragedy.  Innocence dies a terrible death in each of these stories.  At the root of the distancing in this novel is a terrible accident in which Adam, our narrator, and Thomas are complicit.
Read more »
Posted by Ted at 12:28 PM 2 comments: 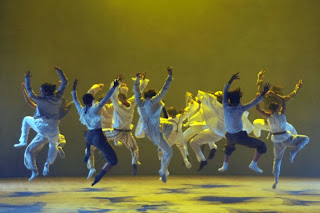 Hofesh Shechter's irrepressible dance piece Sun is joyous and aggressive by turns, filled with images of war, street violence, and colonialism.  Cutout images of tribesman, sheep, and businessmen clash with his live performers who are clad in Middle Eastern garb, as commedia dell'arte clowns, and characters out of Chekhov - playfully undermining his artifice.  Wagner and Irving Berlin, tribal drums, and bagpipes are sampled in his eclectic and sometimes assaultively loud score.  A quick-cut, episodic rhythm is frantically energetic, jolting the viewer from one scene to the next.  The movement vocabulary evokes Middle Eastern and modern dance but his choreography is filled with the individual personalities of his dancers, who are a joy to experience.

At the corner of science and culture... 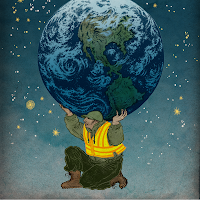 At the corner of science and culture sits a mollusk, a Nautilus, to be exact.  While we're both waiting for me to post something bookish, check out this innovative and sharp looking new magazine and blog.  Each issue has a theme, a new chapter is released each week.  This week, find out why fish are all blissed out.


Jeffrey Hawkins Writer likes to say that the average drop of water entering the Mississippi River headwaters north of Minnesota will be used 11 times before it reaches the Gulf of Mexico. That drop might irrigate crops, flow through wastewater treatment plants, pour out of residential taps, move through digestive systems, arc into toilet bowls, swirl down into sewers, and then do it over again. Whatever its fate along its 2,300-mile journey South, this water will mix with all kind of chemicals, human metabolites, and unnatural compounds.

With my admiration of female authors from the British Isles - Virginia Woolf, Irish Murdoch, Penelope Fitzgerald, Elizabeth Taylor, Marghanita Laski, A.S. Byatt, Deirdre Madden, Sarah Salway, Zadie Smith, and Margaret Drabble - it's peculiar that it took me all this time to read Barbara Pym. Unfortunately, I even missed Thomas and Amanda's Pym reading week, but I have finally righted the wrong.  Quartet in Autumn (1977, Plume) was Pym's comeback after 16 years without having been published.  It concerns four persons around retirement age - Marcia, Letty, Norman, and Edwin.  All work in the same office of the same department of the same generic, unnamed business, and have done so for decades.  They live almost hermetically sealed off from any meaningful contact with another person.


Letty picked up her bill and got up from the table.  For all her apparent indifference she was not unaware of the situation.  Somebody had reached out towards her.  They could have spoken and a link might have been forged between two solitary people.  But the other woman, satisfying her first pangs of hunger, was now bent rather low over her macaroni au gratin.  It was too late for any kind of gesture.  Once again Letty had failed to make contact.

Even their encounters with each other after years of working together are generic, risk free.  Norman and Marcia share a tin of instant coffee which Marcia buys.  Each afternoon, she makes them both a cup, not, as they would have it, out of generosity or friendship, but simply because it is less expensive.  They live out this charade of economy never imagining greater meaning behind their sharing, because they dare not even consider intimacy, let alone commit it.  They shun the risk of touching or being touched by another human being.  They shun it as though they might die of it, and yet, and this is the beauty of the book, now that Marcia and Letty are to retire, each of the four considers their time in life, and endings, goodbyes, death itself, and each is forced to reckon with why they haven't taken the risk to know another person better.