Last weekend, thanks to my friend Sheila, I attended a screening of a The Awful Truth, a 1937 screwball comedy about a married couple who argue, plan to divorce, but just can't seem to leave each other alone because they can't stand seeing the other with anybody else. With Cary Grant,Irene Dunne, (and Asta, the dog from the Thin Man films), it was shown at The Museum of the Moving Image, a spot well worth visiting if you are in NYC.  This is the film that some critics say, made Cary Grant a superstar, and it's not hard to see why.  It is dead clever and full of good belly laughs.

It was introduced by film writer Farran Smith Nehme on the release of her novel Missing Reels (Overlook Press, 2014), thank you, Overlook, for my copy.  One could almost call the event reverse product placement.  Rather than the film including the book, the book mentions The Awful Truth (and sooooo many other vintage films) in its pages, and occasioned this screening.  But really, the film could not be better advertisement for Smith Nehme's entertaining novel which is part mystery, part romance, part love letter to vintage films, and a genuinely good time.  The time? 1980s. The place? New York City, but this is a NYC without cell phones, without Disney in Times Square, a NYC that had payphones and vintage movie houses.  I used to go to them all - The Regency, Carnegie Hall Cinema, St. Mark's Cinema, The Thalia - and see not just one classic film, but usually a double feature!  Aaah, those were the days.

Some question the relevance of live theatrical performance in the age of Tivo and live streaming, but you wouldn't if you had seen two productions we attended, one off-Broadway and the other at the Metropolitan Opera.  The New Group's production of David Rabe's 1971 Sticks and Bones is a still-fresh indictment of American hypocrisy, while the 1991 The Death of Klinghoffer by John Adams and Alice Goodman, although an over-literal production fails to ignite the material, is still resonant, especially in its having been mounted against the fear (unfounded) that its content would be incendiary fodder for anti-Semites. 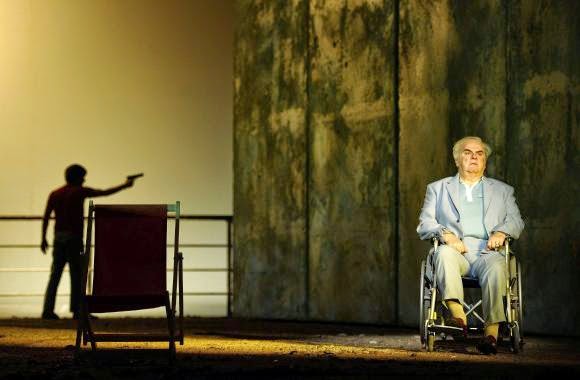 First the opera.  It is based on the 1985 hijacking of a cruise ship by Palestinians.  The American, British and Jewish passengers are taken hostage, and a wheelchair-bound Jewish man is murdered.  The ship's captain, rather than reporting the killing and trading lives for demands, reports to the authorities that nothing has occurred, forestalling escalation and letting the hijackers go free. It's a tactical decision, not a referendum on the value of a man's life.  One could say that the captain chose not to value Klinghoffer's life more than that of any other passenger.  As played by Paulo Szot, it was not a choice the captain took lightly.  Of course, that doesn't make it any more tolerable for Klinghoffer's loved ones.

Ted at TED-Ed - on the brain, naturally.

I recently co-created a neuroscience lesson for TED-Ed.  It just went live.  Check us out!