500 Clowns - Daring to Show Up in Performance 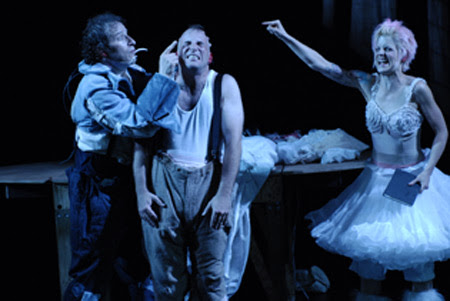 500 Clowns is a company that combines circus, heart-in-your-mouth acrobatics, improvisation, and the free adaptation of a well-known text (usually) to make a kind of theater you have probably never experienced before, unless you've experienced 500 Clowns. Full disclosure: they were founded by good friends of mine. Now, that said, they are fabulous. They continually play with the imaginary border between performance and reality that most productions take very much for granted. You know the normal routine: they turn the lights out, you sit in the dark, that means everything is different now, holy cow she's really sad, that dress means it's 1890, etc... 500 Clowns play this game differently. You've arrived in a space, they've arrived in a space, we both know it's a performance. They usually have one or two physical elements and a very limited number of props - in their current show Frankenstein, it's a table-ish sort of contraption which ingeniously becomes, well, anything they need, and they have a candlestick, I think that's it. In 500 Clown Macbeth it was a precarious scaffolding, some crumpled pieces of cellophane, and the crown. Whoever wore the crown was the king, the action of the piece was ambition (surprise, surprise) and that was expressed by trying to climb this scaffolding. The whole company (all 3 of them) also played the witches. But don't think they're all fun and games. The best thing about 500 Clowns is, ok two things, 1) is that they distill what the story is about to a nugget that can be physically expressed and then they play mercilessly with that theme through improvisation, acrobatics, and their own honest emotions. They played in Frankenstein with how we create enemies - through all their antics, this was the core of their piece and it really resonated. We think we're forced to be fearful, and initially fear is a reflexive response, but we can participate in it too, just as we do every other emotional response we have to circumstances. 2) In flirting with the edge between theater and "life" there is nothing that is not real to them in the performance. There are no distractions, there is only what they're doing or what we're doing there in that space on that day. They build their performance around playing with that moment and around physical risk taking, and it's all real - no nets - the result is really involving because they're really doing it - no pretense here - even though they're telling a story and playing characters. They are clowns, so they are frequently very funny, their shows have the delight of kids playing in mud, but they find a way to build their action to involve their emotions as well (you know, like "real" actors) and when they do, there are no nets here either. I'm not going to ruin how they do this in Frankenstein, but I found the result really effective. Frankenstein and a second show with music called 500 Clown Christmas are playing at PS122 in New York through New Year's. If you are in the New York area here is where you go for tickets. But they tour as well - check out their website at the link at the top of this post to see if they're coming anywhere near you, and if they are, run for your life! That is, go and see them.
Posted by Ted at 7:38 AM

They sound amazing. Do they ever tour?

Stefanie - They do tour, their website lists their schedule and they are truly surprising, hilarious and thoughtful.