This is one of those meandering weekend posts. First let me say, I am not going to allow the fact that a neuron has capacitance, that is the ability to store charge, cramp my style today. It cramped most of my style yesterday and that was not at all pleasant. 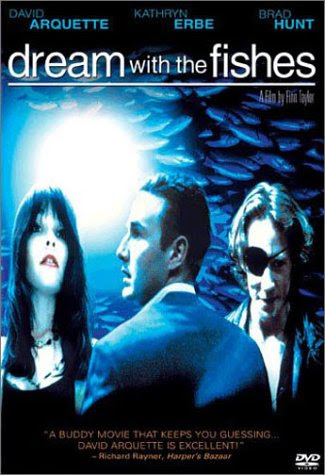 Dream with the Fishes is a film made in 1997 that I remember seeing several times when it was first released. David Arquette is the most familiar face in it. It's written and directed by Finn Taylor. I really liked this film a decade ago and so it had been on my Amazon wish list and I ended up getting it for christmas. For some reason I didn't get around to watching it until now. I think I was afraid I wouldn't like it as much any more. Although I found some of the writing and acting a bit obvious now, it remains a really good and even touching story. A man terrified of risk lives as a voyeur and can't stand himself anymore, so he decides to end his life. He meets a man who, let's just say, has every reason to take what risks he can. The film is the story of their unlikely friendship. It's well worth a watch and has a great soundtrack.

The Ragazzo and I also got the DVDs of the first year of BBC television's Rome from the New York Public Library and watched the first two episodes over a tray of salami, cheese, salmon pate, salad, crusty bread and red wine. It is a well written dramatization of historical events in around the first century BCE. These episodes were wonderfully directed by Michael Apted. He and his team manage to introduce character and plot lines, create the feel of the bustle of an ancient city, and battle grounds, and give a very thorough sense of period while the behavior still has the haphazzard, accidental feeling of verissimilitude (I love that word) that we expect from contemporary film and television. The only odd touch is the theme music, which is so reminiscent of the title music for Carnivale that it made me smirk. There are loads of wonderful actors like James Purefoy, Lindsay Duncan and Ciaran Hinds to enjoy. It was filmed largely in Rome and at some points they had five acres of backlot and six sounstages in action at the famous Cinecitta studios.

And I'm close to finishing In the Land of No Right Angles by Daphne Beal. The college educated Alex returns to Nepal for a second and third time, ostensibly to photograph, but perhaps really to try to capture something of who she was when in the grip of innocence (as I did when watching the film Dream With The Fishes again), or to assuage her guilt for what has happened to the young girl, Maya, whom she brought from the country to the big city at the behest of her guru friend Will. It's later sections are full of you-can't-go-home-again insights that are, I expect, part of Alex's coming of age, as this is a coming of age novel. I feel a melancholy atmosphere descend in the book's home stretch, but I still have 50 pages to go so I will hold off until I have read it completely.

And, really, any day will be instantly better if you try La Tur, a cheese from Italy made from sheep's cow's and goat's milk, all blended into this incredibly light spreadable mild cheese. Yum. Great on whole grain toast. I had it with a glass of black cherry juice mixed with bubbly water.

Lots of studying to get started on now. Hope it is as nice where you are as it is here. We're finally heading towards autumn in NYC.
Posted by Ted at 8:06 AM