The 20th century as patient (Books - The White Hotel by D. M. Thomas) 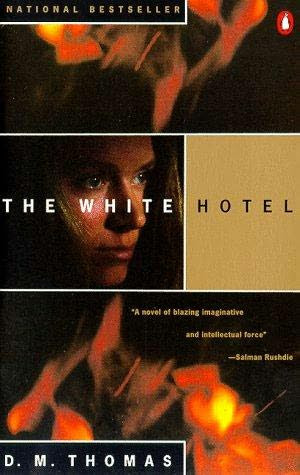 I read D. M. Thomas's 1981 novel, The White Hotel, in connection with a class I'm taking on psychoanalytic theory - how it was born out of the science and the symbols of its time and place, how its practice impacted individual lives and culture, and how psychotherapeutic processes evolved from it. The novel is a remarkably potent record of the life of one woman, a Ukrainian opera singer, living in Vienna in the early part of the 20th century. To say she is one woman is misleading, she is a many-layered affair and that is one of the book's points. One of Freud's chief metaphors for his psychoanalytic process was archeology, and that is an apt and visible metaphor played out in this novel as it is the unearthing of the meanings of not only one individual's life, but the lives of the denizens of the 20th century. It also evoked for me Ibsen's Peer Gynt, and his discovery as the end of his life as he faces the Button Maker (the play is a must read) that a person's identity is like an onion. As you peel away the layers, you keep finding more.

One could say that the book's different sections introduce us to our protagonist as biographical fact, as dream, as a third person's imagining of her, as a result of natural forces (the drive for pleasure, or toward death), or her self as the product of world events, or fate if you prefer. Or one might say that the book's structure, which includes her life as a fever-dream of a poem, her journal, a case study of her psychoanalytic sessions with Sigmund Freud (this chapter is in a tour-de-force act of ventriloquism. Thomas as Freud is superb), a more conventional third-person narrative of the facts of her life without psyeudonym, and the aftermath of these creative acts - each of which were 'her' - as they unfolded into what became her life. Id. Ego. Super-ego. One can look back and create sense through narrative, Thomas seems to say, but no analysis has all the answers. The only final version of a life, is discovered after it was lived. Analysis is not about truth per se, it's about interpretation so that one can live with the events that came before. However, it does not determine what will happen in the future. The forces that impinge on a single life are more than personal or even interpersonal. We are also made by our culture, and by history. In the final chapter we see how the pieces that make up I/Anna/Elisabeth live in the punishing facts of Stalin's selling out the Jews of Russia to Hitler and his SS and, at once, how the symbols that have been born again and again through the different narrative interpretations that are all aspects of the same woman are finally given their ultimate truth. The facts are searingly cruel but one's experience of life is itself a creative act, and one can see how our protagonist finds coherence and solace through what she has created and Thomas (the ultimate creator in this case, no matter how temporarily real she becomes) makes a wounded patient of each inhabitant of the 20th century and attempts to help us find beauty (for there isn't much sense) there as well.

When I finished Thomas's novel at 1 am, there was no way I could go to sleep, so, at the recommendation of Mark Sarvas, I started The Unnamed, Joshua Ferris's new novel. I barely began it before the effects of the White Hotel began to wear off enough for me to go to sleep, but The Unnamed already has me in an iron grip. I expect that you should hear more soon.
Posted by Ted at 8:08 AM