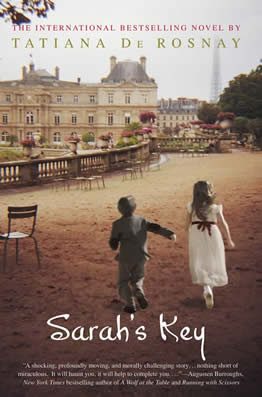 Tatiana de Rosnay's Sarah's Key alternates two narratives, one set in 1942 as Paris's Jews are rounded up by their own police and sent to Auschwitz to impress the Nazis and their Gestapo, with whom they had recently allied themselves. The other set in 2002 Paris, as Julia, an American journalist married to a Frenchman, researches the story of Vel' d'Hiv' (the French name for the roundup). She discovers that the apartment that has belonged to her husband's family and into which they are planning to move after a renovation, was originally occupied by a Jewish family and suspects it may have been acquired through less than above-board methods. It becomes her obsession to find out who occupied that apartment and what happened to them and the knowledge changes her life as the book cover's blurbs assures me Sarah's Key will change mine. What amazed me rather was how predictable and lacking in personality this book club favorite is. It's pop-chick-lit meets pop-Holocaust novel. Think Sleepless in Seattle meets Life is Beautiful. Never complex, never subtle, Sarah's Key held not a single surprise for me either in how its historical plot unfolded nor its contemporary one. The writing was clunky - constantly explaining the obvious - usually with a cliche.

Her mother. Her father. Her brother. She missed them so much she felt physically ill. She felt as if she had fallen into a bottomless hole.

"I can still hear her scream," he whispered. "I cannot forget it. Ever."

What Sarah's Key does have going for it is plot. Vel' d'Hiv' is heart wrenching history and the reader uncovers the details on a factual basis and on an imagined personal one, learning what happened as Julia learns it. It's a good device but the contemporary plot aligns with the historical one too neatly, the children in the story parallels Julia's pregnancy, the apartment she is renovating happens to have been inhabited by a Jewish family, I feel like the novel is constantly hitting me over the head to make sure I got it. I got it.

What this book did accomplish is to make me even more curious about the history of occupied France and its aftermath. In fact, I started Antony Beevor and Artemis Cooper's Paris After the Liberation yesterday (it had been sitting on the TBR pile for a few months). So you could say that in the end, de Rosnay's book accomplished something, so does it matter that it wasn't well written? It does to me. The kind of book I value enriches me with the complexity of human beings. It shows people as living paradoxes, it doesn't merely explain to me that they are paradoxical. I really hated that de Rosnay split up the family into those who sided with Julia and those who didn't and then had the dying matriarch decide the outcome with a little narrated moralizing speech at the novel's end that delivered the book's lesson like a family drama for the Disney Channel or ABC-Family. I also value a novel that asks me to sustain my attention to a chapter that takes longer than 5 minutes to read. Reading a rich novel is an enveloping experience in which events unfold with the improvisatory twists that seem to mimic those we experience in our lives, it is not just a way to absorb information. I have been more surprised by the events in re-reading a novel (for example, Chiam Potok's In The Beginning earlier this year) than I was in reading Sarah's Key for the first time. I was interested in seeing what all the fuss was about, but ultimately although informed and even moved (once), I was disappointed to discover such thin gruel made of such rich stock.
Posted by Ted at 7:35 AM

Ick. Sounds awful. Thanks for the warning! :-)

"Chick Lit meets Holocaust novel" was enough to keep this one off my list. I'm glad it opened up your curiosity around these events though. In that respect the book might work for me too!

How awful!! I agree with Kathleen, the "chick-lit meets holocaust" was enough to put me right off. Tacky much? And the excerpts of clunky writing just sealed the deal. Thanks for the review though :)

"Chick-lit meets Holocaust" - great evaluation! My book discussed this a couple months ago, and overall they liked it. I loved the history (had never heard of the Vel' d'Hiv') but detested the Julia portions. Will look into Paris After the Liberation.