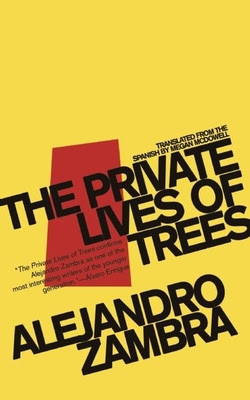 It was Verbivore who alerted me to young Chilean writer, Alejandro Zambra, and his 2007 novella The Private Lives of Trees and I am glad she did. This is a smart little piece of self-reflective meta-fiction. A tale about a tale and about tale telling. At the same time, it has a cozy sweetness, despite having a protagonist who is about to (maybe) lose his wife.

Julian lulls the little girl to sleep with "The Private Lives of Trees," an ongoing story he's made up to tell her at bedtime. The protagonists are a poplar tree and a baobab tree, who, at night, when no one can see them, talk about photosynthesis, squirrels, or the many advantages of being tress and not people or animals or, as they put it themselves, stupid hunks of cement.

This evening, Julian tells Daniela this story as much for himself as for her because his wife and her mother, Veronica, is several hours late in returning home and Julian has a growing suspicion that might not do so. He makes a deal with himself that he will tell the story until she does or until he is sure she will not. As he does so, that imagined world gives way to others:

He takes a long second to create, instead, an eye-catching room, replete with mirrors and a fountain that emits a subtle artificial noise. He imagines Veronica dulled by rough whiskey, topped off with a few lines of coke, moving, unhurriedly, on top of someone.

Julian has gotten into the habit of always imagining and drawing out his imaginings in his form and playing with them. It is an artist's habit. If he imagines, he writes. Zambra, the writer writing of the writer, plays with the written form as a hall of mirrors.

When someone doesn't come home in a novel, Julian thinks, it's because something bad has happened. But this is not, fortunately, a novel: in just a few minutes Veronica will arrive with a real story...

This works at most points in the novel except for Zambra's self-referential reference to his first book, Bonsai.

At the end of a cold night of writing, Julian decided to stop filling pages with diffuse and indecipherable stories; he would write, instead, the diary of a bonsai, a painstaking registry of the tree's growth. It seemed simple....

This reference got a little cute for me, it was as if Zambra couldn't figure out where the joke should end. The most powerful imaginings of this intellectual adventure, is Julian's imagining his step-daughter Daniela at 15, then at 30 years old, without a mother, reading this novel, which contains her 8-year-old self hearing a story about trees....

This is a story about how we remember in stories, project to our future with stories, how we comfort with stories, how indeed we create our lives through stories, or at least it feels that way while we are telling it. It is a swift and sweet read from a fresh voice (as translated by Megan McDowell). I'm tempted to get a copy of Bonsai and see what Zambra's debut was like.
Posted by Ted at 8:18 AM

I'm so glad you enjoyed it, and I love that you used the word "cozy" to describe it. I agree with that, and it was one of the more refreshing aspects of the book. So often, when a book is heavy into the metafiction, it is also quirky, or "cool", for lack of a better word, and sometimes alienating for the reader...but this book wasn't like that at all. It was an engaging story on top of its metafictional shenanigans.