Complex worlds, simple means (Books - Complex Worlds from Simpler Nervous Systems & To the End of the Land by David Grossman)

Given that classes have started up and the books I'm reading are all on the large side, I haven't finished anything this week, but I noted a common theme in the reading that is consuming my interest.

Frederick Prete, Ph.D. has edited Complex Worlds from Simpler Nervous Systems (MIT Press, 2004), a collection of the writings of scientists who study how creatures with much smaller nervous systems than our own perform what we think of as complex cognitive functions. The Portia spider, for example, whose brain is literally the size of a pin, can filter out extraneous sensory information from among the plentiful array of moving and still things that are the surrounding forest, to focus in on a single speck that is its prey. Over the course of 20 minutes, although its prey is quite close, Portia can plot a detour so that it will not be caught stalking it. The nervous systems of insects were, until the 1970s, thought of as no more than basic reflex machines. Yet this process could be seen as involving planning, decision making, and delayed gratification - processes we would more commonly associate with vertebrates. Another chapter explores how honeybees can apply abstract properties to novel circumstances. Neuroscientist Michael Land writes:


My favorite example of sensory simplification is the technique that fiddler crabs use to distinguish predators (requiring escape) from conspecifics (which can be fought, mated, or ignored). Instead of identifying predators (usually birds) from their form (beak, legs, etc.), all the fiddler crab has to ask is "Does this moving object intersect the horizon?" Since a line joining the crab's eye to the horizon is at crab height, anything above this is bigger than the crab, and so is probably bad news. Anything below the line is, at least, not life threatening. Simple though this is, it does require the crab to keep its elongated eye accurately aligned with the horizon, and for this it uses both visual and statocyst [invertebrate balance organs] reflexes.

Nature has evolved many ways for creatures to accomplish complex behaviors that are not dependent on the combinatory possibilities afforded our species with its billions of neurons. While that volume of cells allows us infinitely more options for interrupting and modify processes, I doubt that spiders become neurotic. This book offers a fascinating collection of such examples written at a high level of detail (so you have to really want to dive in) but at a moderate level of technicality (i.e., its not as complex as a scientific journal article). The prose is accessible, at times even entertaining. 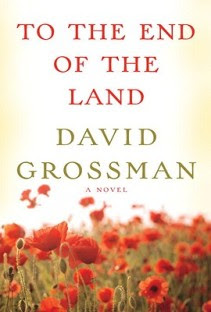 David Grossman's To The End Of The Land has me utterly absorbed. It is a book of great human depth written with an astonishingly simple structure, a small number of central characters, and a single action propels the whole complex creation. There's that parallel I was speaking of. Three teenage patients meet while ill in the hospital during the 1967 war in Israel - one woman: Ora, and two men Ilan (good looking and ordinary), and Avram (a person of magnetic and dazzling originality). Ilan and Ora marry, having two sons - Adam and Ofer. This creates two overlapping triangles, both with Ora at their apex and two men at their base (two her lovers, and two her sons).

The present time frame of the narrative is another war for which Ora's son Ofer volunteers to extend his compulsory military service rather that go on a hiking trip with Ora in the Galilee. Ora, fearing his death, comandeers Avram, from whom she has been estranged, to go on the hike with her as a way to escape the news reports and the long wait to find out if Ofer survives. The single action of the novel, embodied in the hike, is a desperate act of memory during which Ora uses interior as well as exterior narrative to prolong Ofer's life. Grossman's narrative is intimate in that come to know the very souls of Ora and Avram, and epic in its sweep across the decades that have encompassed Ora's and Avram's lives and the geographical space that is Israel. It is work of deep human feeling; long, but not longer than the action of the story seems to require, and confidently paced so that I have no desire to leave, only to know more.
Posted by Ted at 9:06 AM