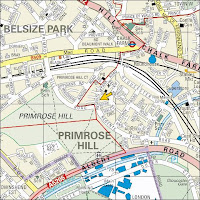 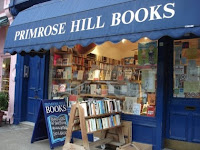 Our stay in London included the addition of a few new goodies I thought I'd share. They were acquired at the personable Primrose Hill Books, a recommendation of Thomas's, and a good one - thanks Thomas! We chose to walk to get there, which took us from the Wellcome Collection's excellent exhibit on Dirt (yes, Dirt. We've found this venue on the Euston Road well worth a visit on our last two trips to London), through Camden which has a lively High Street, past the canal adjacent to the London Zoo, and then up Regent's Park Road which turns into Primrose Hill's main drag. This has the feel of a charming village street within a city (something like New York's Park Slope), with abundant shops and restaurants, the book shop, and places to buy things for a picnic if you want to walk up the hill and take in the well-known view of London.

After forty minutes or so in the shop, I had narrowed down my take to:

I had heard of author Rosamond Lehmann but have never read anything of hers and was not familiar with this novel, The Ballad and the Source. It seems to be a dark gothic myth of revenge written during World War II. If it were a film, it looks more like Jean Cocteau would make it than Hitchcock. I may need for the weather to turn cold again before I read this one.

Naomi Alderman's The Lessons has the evil, seductive feel of Donna Tartt's The Secret History, only set in Oxford rather than a small American college. I had not heard of this novel when it was released. She quotes Cavafy in the epigraph, so it can't be all that bad. It looks like it could be an addictive read and I'm looking forward to one or two of those this summer.

I love Hilary Mantel's writing and A Change of Climate looks like it might be challenging. It concerns a couple who were missionaries in Africa and who begin to adopt orphans as a way not to see the crises going on in their own family. At least that's what I gather from the blurb.

A retired teacher tries to get rid of an evil investor who has built an ugly new
development in her village. Union Atlantic by Adam Haslett looks as if it pits the eccentric individual against homogenous corporate greed, I hope to good effect.
Posted by Ted at 8:08 AM

How exciting that you took my advice, and more importantly, that you were glad that you did. The walk you took to get there sounds like it was just as satisfying as the destination. We have friends who live near to the shop so that street feels a bit like home to me.

It's been awhile since I've been to London, but I've always thought that the walk along the canal near the zoo was a pleasant one. Hope you had a great trip!

T - Yes, that bookstore was a great idea, and I hadn't been near Camden in years.

Cam - Welcome back! Glad to see you around again. I seem to be a much more occasional blogger now myself, must have something to do with school. Yes, the trip was quite nice!