Who says reading is in decline? 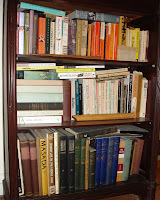 I was struck in reading today's New York Times that the number of pieces on reading and books must have reached some sort of critical mass. Or perhaps it was only the Times's effort to assert its own relevance?

The online edition has begun a series called Draft. It concerns the art of writing and its maiden voyage was a riffy, elegiac essay by Jhumpa Lahiri on the pleasure she finds in sentences (the written not the served kind). This was flanked in the Sunday Review by two more essays. One by Dwight Garner where the message was on the medium - what sort of reading calls for e-readers, iPads, or the printed page, he asks? He cited the recent New York Review of Books essay by novelist Tim Parks (speaking of books in the news) which championed electronic reading media as

a more austere, direct engagement with the words appearing before us and disappearing behind us than the traditional paper book offers, giving no fetishistic gratification as we cover our walls with famous names. It is as if one had been freed from everything extraneous and distracting surrounding the text to focus on the pleasure of the words themselves.

Thoughtful though Parks's essay entitled E-books Can't Burn might be as I argued on a fellow blogger's cite, the fire-proof nature of the e-book is not literally true. There is still a physical and hence flammable component to the reader. More importantly one could argue that the lack of a physically distinct presence for each book lessens the potency of the object as uniquely representative of its author and ideas. Now books may not be burned not because one cannot burn the e-reader, because one of course can, but because e-readers as objects cease to be symbolic of the ideas contained in them because one book is indistinct in its physical reality from another. The ideas without their physical representation will become rootless, indistinct, democratized. What a shame. It is how a book embodies the distinctness of its insides that incites me to cover my walls with them, not the status afforded by their famous names. Though I guess I must acquiesce to Parks's accusation of fetishism.

Annie Murphy Paul's essay Your Brain on Fiction covers a topic close to my heart - the neuroscience of reading. Interpreting from the results of such studies as this one on narrative by Drs. Keith Oatley and Raymond Mar as indication that


Fiction - with its redolent details, imaginative metaphors and attentive descriptions of people and their actions - offers an especially rich replica. Indeed, in one respect novels go beyond simulating reality to give readers an experience unavailable off the page: the opportunity to enter fully into other people's thoughts and feelings.

Finally, the weekly essay on the back page of The New York Times Book Review by Martin Sixsmith covers Vladimir Putin's proposed required reading list for Russian citizens. Though his titles are not yet available, his desire to shape the canon produces mixed emotions. How far are his recommendations from the days of government approved and, by extension, government banned art? But as Sixsmith writes


Reading according to Putin, is not just an elective individual activity, but one that has decisive implications for the nation...In the early Soviet years a poem could be a death sentence, as the poet Osip Mandelstam pointed out. "Only in Russian do they respect poetry," he told his wife. "They even kill you for it."

Not only Putin's little list, but the ample space given books and reading in this Sunday's Times belies the oft-reported decline in reading.
Posted by Ted at 4:51 PM