Free Will & the ne'er do well (Theater Review: The Return of the Prodigal by St John Hankin) 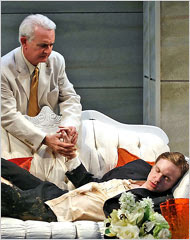 Have to post tonight - I'll be gone most of tomorrow.

St John Hankin's The Return of the Prodigal is the latest forgotten play rescued by Mint Theater, which fills a vital niche in the landscape of gritty off-off, edgy off, and decorous full-on-Broadway. Mint (an intimate, off-Broadway theater) exists to produce and publish long forgotten plays that deserved better luck - the hits that should have been. Full disclosure: I was Mint's Associate Director for four years and sing the praises of their value to those who work in theater, as well as those who like to attend or to read fine plays.

Hankin was a contemporary of Shaw and Granville-Barker's who wrote five plays at the turn of the 20th century, before drowning himself in the river Ithon. Mint produced the only other production New York has seen of his work - The Charity that Began at Home - in 2002. Hankin, like Shaw, wrote social relevant work, mostly in a comic vein, in a time in which most theater had not figured out how to break free of the drawing room. The Return of the Prodigal received a production in London at The Orange Tree in 1993. Mint published a volume of his work this past season.

The play concerns Eustace, the son of a wealthy business man, who returns to his family having proved a failure at every line of work he has tried in ten years. Roderick Hill plays Eustace beautifully - alternating between reveling in his leisure, deep pain at his utter uselessness, and a malicious twinkle in trying to manipulate his father into supporting him because his father is a man of responsibility, as well as a candidate for public office - fearful of scandal. Eustace is an island of candor in a world of, at best, good manners and, at worst, deceit. The actor effortlessly sashays between each of these realms while the other characters, all slaves to duty, propriety, or amibition, stand hopelessly around him. Occasionally Eustace, this breath of disappointed but honest life, fans their flames and brings one of them to life, but mostly they walk through their paces, speaking their lines. Most of the actors around Mr. Hill seemed bound to fulfill this same role, with the exception of Richard Kline, playing his father, and Leah Curney, playing his sister in a lovely scene with Eustace that finally reveals some of the life hidden beneath the conventions of Edwardian society.

Set and costume designer Clint Ramos and director Jonathan Bank chose a modern take - a choice which smartly brightened a play we would have otherwise witnessed in a dark, paneled drawing room, while highlighting the modernity of its theme. The text was spoken without British accents but with a formality of diction, a choice I would normally have liked, although it accentuated the fact that most of the cast acted from the neck up. I wished they could have lived while they spoke their lines, but those remained separate activities for most of them. Sassy 20s jazz chosen by Jane Shaw, lightened the scene changes and provided good atmosphere.

Hankin's story provided plenty of after-theater talk and thought about the responsibility of society as well as the concept of free-will. On the negative side, I find Hankin's writing a bit explicative. His characters often state their case rather than behaving so that we can see it. But he is witty and observant. Eustace argues that his father should support him because it is his nature to lack ambition. I won't tell you whether he does - in case you can see or read the play - but does he do so purely manipulatively so as not to work? Or is this truly his nature? Neither paints a pretty picture of this character, who somehow still remains charming. If his father supports him - is he loving or lacking in confidence of his son's ability? And it begs the larger question we can all ask in our lives every day as we contemplate taxes, giving change to a beggar, the responsibility of the state, the responsibility of the family. Are some people simply not cut out to be useful? Should something be done for them, about them, by whom?

In any event, the evening does what I hope good theater will - provoke and entertain - and I really found Roderick Hill's performance affecting. In fact, if it hadn't been there would have been no contest, but he so deeply conveyed the pain of his failure, the certainty that this was his nature and not his fault, that his actions provoked conflict - the substance of drama.
Posted by Ted at 10:19 PM