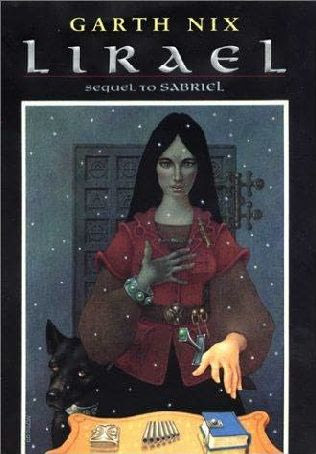 Lirael is a teenage member of the Clayr, a sect of seers. She has not come in to her power to see by seventeen, as she was supposed to. That is only the worst among many things that make her different from her community and are experienced by her mostly as a burden, something that makes her self conscious. She copes by isolating herself and using her magical powers to create a dog to be her friend. Sameth is the teenage son of Sabriel, the Abhorsen - the magical leader of a magical region of a land otherwise similar to our's. He too is posessed of magic powers and, like his mother, is a necromancer - can walk between the worlds of the living and the dead - demanding obedience of dead spirits by use of a set of bells. He is to begin to learn this art as he must one day assume the post of Abhorsen from his mother. Both of Garth Nix's teenage central characters in Lirael must assume the mantel of adult responsibilities, of one too little is expected, and of the other too much.

I'm enjoying the fact that Nix creates a world in which the Clayr can see not the future but possible futures - it's a nice twist on the classic theme of looking into the future that bows to our current models of time in the world of physics. The future exists in the realm of probability rather than certainty, so the Clayr's skill is an art rather than an absolute science.

If this gate was the beginning of a path named for her, it had been made at least a thousand years ago. Which was not impossible, for the Clayr sometimes had visions of such far-distant futures. Or possible futures, as they called them, for the future was apparently like a many-branching stream, splitting, converging, and splitting again. Much of the Clayr's training, at least as far as Lirael knew, was in working out which possible future was the most likely - or the most desirable.

I'm also enjoying the fact that, although Sameth will inherit the proverbial throne some day, at this point he is a moody teenager and, to his dismay, a younger brother. His sister is put in charge of the kingdom in his absence and forces on his all sorts of chores and activities for his betterment when Sam would rather tinker in his workshop. Nix describes his sullenness with accuracy and enjoyment.

One more item and I'll leave you for the world of neurochemistry, Lirael has discovered a magic book that appeals to my booklover's imagination:

Most of all, there was magic and power in the type. Lirael had seen similar, if less powerful, books, like In the Skin of a Lyon. You could never truly finish reading such a book, for the contents changed at need, at the original maker's whim, or to suit the phases of the moon or the patterns of the weather. Some of the books had contents you couldn't even remember till certain events might come to pass. Invariably, this was an act of kindness from the creator of the book, for such contents invariably dealt with things that would be a burden to recall with every waking day.

Sounds very Borgesian, no? I could really use that book that holds off on burdening you with some of its contents until you need it in my neurochem class! I don't know if I love or fear the notion of a book you can never truly finish. It's romantic on the one hand, torturous on the other. In a way, though, aren't some books just like that?
Posted by Ted at 6:25 AM

I read this book in middle school and then again in high school. I really enjoyed it. Book 2 isn't as good as this one though!