I have tried my damndest with Charles de Lint's Moonheart and I just can't do it. 160 pages qualifies as the old college try, doesn't it? Maybe it depends which college. I did enjoy two of his more recent novels, so I won't give up on his writing entirely. But that leaves the field wide open - a very important thing two weeks prior to the start of classes. Although I have been pretty busy at the lab most days, it's a far cry from what things will be like when the semester begins. So this is my last hurrah before chaos ensues. 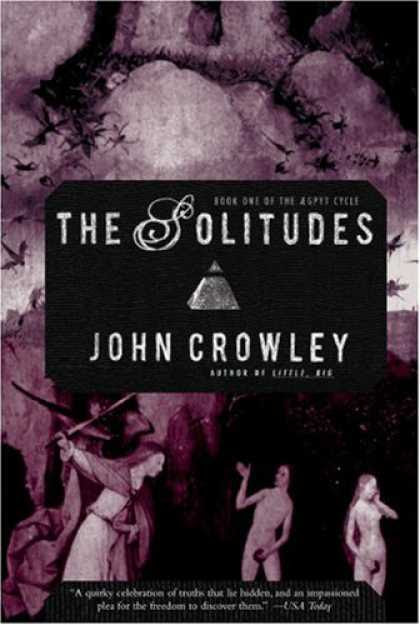 I had a copy of John Crowley's Little, Big which I started over and over again for years and could never get through it. I saw that Matt was reading The Solitudes, book one of The Aegypt Cycle and it made me curious. When a fantasy series earns enthusiastic praise from literary critic Harold Bloom, it gives one pause. Or it gave me pause at any rate. I was in a bookstore the other day to buy a present, though really any excuse would have done, and I decided to read into it a few pages. The twin stories of The Aegypt Cycle (the series title is misprinted on the cover of the book, I hope the folks at The Overlook Press have discovered this) follow mystic John Dee and heretic Giordano Bruni in the sixteenth century and historian Pierece Moffett in the twentieth, who is researching a book on Dee and Bruni. Crowley's writing is eloquent and not merely assured, but has an old world omniscience to it, that is tempered by an arch humor. So that he might offer a sentence on the very first page like this one:

They had been at work not a quarter of an hour before the stone when the first creature appeared: their soft prayers and invocations had ceased, and for a time the only sound was the rattle of the mullions in a hard March wind that filled up the night.

And yet, Crowley gives Moffett a home in the fictitious town of Blackbury Jambs, New York. Given the fact that this fantasy is praised most often for its erudition, makes me glad that the author has a sense of humor. The narrative voice has an alluring cozy-tale lilt to it that is drawing me in:

So he woke by a brass alarm clock that stood on four feet and had a bell atop it that two clappers struck alternately, as though it were beating its brains out. It was so loud that the first moments of its ringing didn't even seem like sound, but like something else, a calamity, he was awake and sitting up before he understood what it was: the clock, hollering and walking on its feet across the bureau top. His cousin Bird in the other bed stirred beneath her covers, and was still again as soon as he stilled the clock.

Such a commonplace event - waking to an alarm in the morning. Crowley anthropomorphizes the clock even as he makes me nod with familiarity at the experience of waking, yet with a completely original choice of words - the ringing sounds like something else, a calamity - all in a tight, consistently voiced paragraph that has me smiling with the promise that I am going to like this book.

Also on the docket: 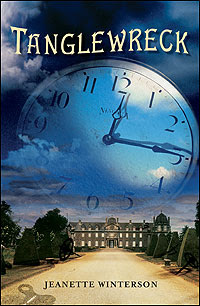 You may remember Jeanette Winterson, a literary rage of the 1980's, for her distinctive, enigmatic, poetic novels like Oranges are the Only Fruit, The Passion, and Sexing the Cherry. Sheila informed me that she has written a fantasy book for children! What can it be like? Though the covers of this book are chock-a-block with hyperbole promising that it is the next Lemony Snicket, the next Wrinkle in Time, the next Neil Gaiman, the next Philip Pullman His Dark Materials, and the next The Phantom Tollbooth all wrapped up into one. I'm hoping it will be the next Jeanette Winterson. The first few pages have a very Dr. Who-ish air to them. .. we'll see.

Scott Pack's big mouth promises that What was Lost, a debut novel by Catherine O'Fllynn, is "amazing." Scott has recommended Thirteen, Tell me Everything, and Electricity. With a track record of three for three, I am trusting that this will be another good one. A girl-detective keeps notebooks on the goings-on of everyone in her neighborhood. She mysteriously disappears. Twenty years later, a young girl who knew her (now a grown woman) tries to uncover what happened to her. Having just dipped in, it seems cleverly constructed and its easy prose moves along at a clip. I'm starting to feel overwhelmed by my choices. I want to read them all!

Last, but certainly not least, I am continuing on my Bernard MacLaverty fest with his Cal. The trusty John Self has had strong praise for both this novel and Lamb, which is awaiting my collection at the library. These are the only two full-length novels remaining for me to read in the MacLaverty canon. The subject is the life of a young Catholic man living in Ulster who feels he cannot fight the Protestant orangemen by joining the IRA as his friends have. I have become an admirer of MacLaverty's observant and precise writing this summer and cannot wait to get into this one.

This weekend promises an embarrassment of reading riches. Hope yours does too.
Posted by Ted at 7:52 AM