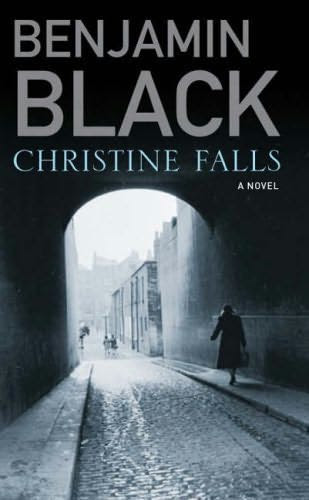 The ending of Benjamin Black's (aka John Banville's) anti-mystery, Christine Falls, did not disappoint.

He was angry again, he was not sure why, exactly, for what he had learned from Sister Anselm had not been news to him, not really. He had begun to consider the possibility that this unfocused anger would be the condition of his life from now on, that he would have to keep bouncing along before it helplessly forever, like a piece of litter buffeted by an unceasing wind.

A detective who is not really a detective, who investigates a crime, or possibly just an accident, that resulted from a wrong-doing he suspects his brother to have committed, but that man is not really his brother. I enjoyed the fact that somehow, even in this anti-mystery, the final scenes are set at a manor house with all the suspects present, but there is no denouement scene, with the detective gathering everyone in the drawing room. Rather, they gather without him as he watches from the distance.

He watched them gathering, and followed them into the drawing rom, where the funeral meats were set out, and as he listened to the hubbub of their mingled and clashing voices, a sense almost of physical revulsion welled up in him. These were the people who had killed Christine Falls and her child, who had sent the torturers after Doly Moran, who had ordered that he be thrown down those slimed steps and kicked and beaten to within an inch of his life. Oh, not all of them; no doubt there were those among them who were innocent, innocent of these particular crimes, at least. And he, how innocent was he? What right did he have to stand upon a height and look down on them, he who had not even found the courage to...

Here the real conundrum is moral ambiguity and the fact that this anti-detective is in some way connected to all the dirty business involving pregnant Catholic women and their babies. In this anti-mystery, the story is all caught up not in events but in character, and Quirke, our anti-detective is, like many John Banville characters, a ruminative man. The mystery is an interesting one, sure, but not so interesting as its affect on Quirke. That is the meat of Black-Banville's book. That and the precise, sad, and melodic prose of a crack writer.

She told him, in that wispy voice she had developed lately, that sounded as if it was wearing out and would soon be just a sort of sighing, a sort of breathing, with no words.

While a mystery is uncovered in this book, this writer takes the time to get what people look and sound like and what events mean just right. It also does not spoon-feed the reader, emblazoning explanations of who did what with ribbons and fanfare. We learn as Quirke learns - by implication, by accident. When we know who did it, the moment almost slips by - an anti-moment for an anti-mystery.