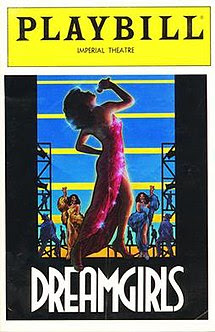 On a completely different note, The Ragazzo borrowed the DVD of Dreamgirls from the library and we watched it last night. I saw the show on Broadway back in the early 1980s and I find the piece much more suited to the stage than film. The film is prettied up and I don't really like the pop-i-fied take on the music. I know it suits the contemporary artists they cast and the tastes of this age, but the original music had a more gospel/R&B sound to it, as did the music of the age of the story. I found it a particularly strange choice considering that the show is about having integrity and going your own way, but I get why they did it. The Broadway take also had these fantastic sections of what, in opera, one would call sprechstimme. A type of music that is both conversationally spoken and also sung at the same time. I remember this from the original Broadway show because it was an almost classical musical touch, but done in the lingo of urban African American culture that was entirely familiar to me from daily life. It was very exciting to hear and made the acting and singing one thing. In the film, although it was done with skill, lines were either spoken or sung and they were rarely acted with the energy, character, or precision of the Broadway show. The exceptions were Eddie Murphy, the man can sing, move, act, - he really is the most incredible chameleon -and newcomer Jennifer Hudson. While she does not have the seismic force of Jennifer Holliday, who created the role of Effie on stage, she brings the role and especially her big aria - I'm Not Going - a refinement all her own. And her talent just oozes out of her. Beyonce does the Diana Ross role justice and really does sing the hell out of her big song. Jamie Foxx should be singled out for a performance which, no matter which facet you examine - singing, acting, or just walking across a space - is utterly lacking in talent, charisma, or basic sense. He doesn't even emote badly, and he sure can't sing. They put seven different wigs on him and changed his costumes about 150 times. It doesn't help. He's a walking void. All in all the movie is too refined and packaged a take on this show for my taste, but it is a good story and some of the songs are satisfying. For those of you who have never seen it. Here's a link to an excerpt of the original stage production from the 1982 Tony Awards on YouTube. I remember the moment in the usually staid awards show that the audience started shouting - the place went beserk. Jennifer Holliday does not do the pretty-picture version of this part. It is down and dirty and spectacular.