Heaven, the graveyard, love and ambition in Thatcher's England (The Graveyard Book, A Matter of Life & Death, My Beautiful Laundrette)

I'm still emerging from a haze of butter fat and imagining that I am unlikely to eat any poultry again for the rest of 2008. Too much was had by all this thanksgiving, but everyone seemed to have a good time of it as the festivities went on for eight hours. It's probably my fear for the state of my arteries that has me reading Neil Gaiman's new young person's novel, The Graveyard Book. As usual, Gaiman has created a dark universe. In it a mysterious man in black, name of Jack, tries to murder an entire family for an as yet unknown reason. But the toddler escapes to the graveyard where the spirits decide to adopt and raise him. I have gotten barely a chapter in, but the characters are richly imagined and the book starts with the crack of a killer opening sentence.

There was a hand in the darkness, and it held a knife.

Hmmm, turn the page or no? It creates a fun contrast to A. S. Byatt's Possession on which I'm taking my time and have nothing new in particular to report. 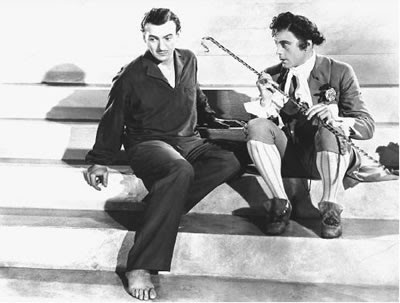 We also watched a couple of movies this weekend. A Matter of Life and Death made in 1946, was written and directed by Michael Powell and Emeric Pressburger. It features David Niven, Raymond Massey and Kim Hunter, and tells a marvelous story about a fighter pilot who manages to escape death on jumping from his plane without a parachute. This turns out to be an "error," but he is granted a trial by jury in heaven in which he can fight for his life. It's a charming and well written piece and seems to unwittingly be the part of some theme for me this weekend! 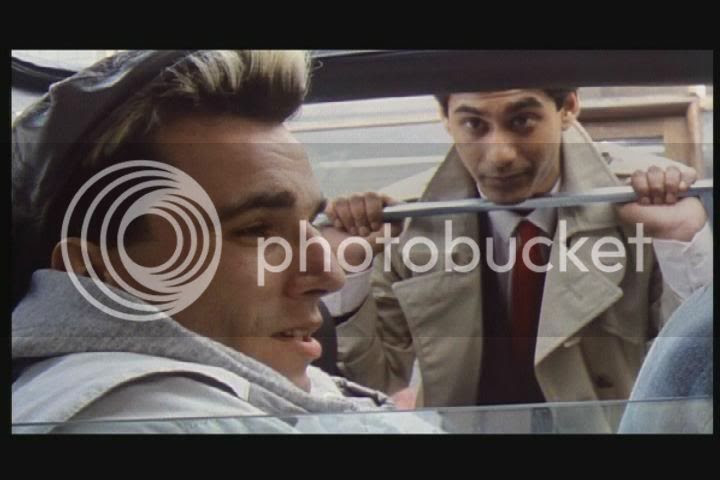 My Beautiful Laundrette written by Hanif Kureshi and directed by Stephen Frears came out in 1985 and was then a startling film. It is in some ways an innocent mess - awkwardly edited, produced on a shoestring, stiffly written and delivered - but is ambitious in the range of societal themes it tackles and its intentions shine through nonetheless. It takes on the racial tension between lower class whites and Pakistani immigrants in Thatcher's England. Critical of all - the poor hoodlums on-the-dole who taunt and attack the ambitious immigrants, the ostentatious, equally bigotted Pakistanis slumlords. Kureshi and Frears also made Sammy and Rosie Get Laid and then Kureshi made London Kills Me with himself directing. This trio of movies are all scathingly observant critiques of racial and class-based tensions in England through the 1980s and 1990s and make an interesting trio to watch. But although My Beautiful Laundrette is the roughest, in some ways it is the most, well, beautiful. Omar, the clueless child of Pakistani immigrants, eschews university and wanders London with nothing to show but ambition and a lovely smile. His mother has died and his father, once a brilliant journalist, gives up on life, pickling himself in vodka and longing for the old country. The papa is played with love and intelligence by Roshan Seth. Omar's uncle is an avaricious businessman, who gives the boy a chance to run a delapidated laundrette and prove himself a worthy heir to the family business empire. Omar pairs up with his childhood friend, Johnny, played by a young Daniel Day Lewis, and the fun begins. The film has no plattitudes to offer. No one group or one character is the good guy and the other the bad guy. This film reaches to tell a complex story about greed, class, race, and love. I remember well the first time I saw the film because it was the first gay story I ever saw that was not about AIDS and not about sex, but instead about two boys who lived complicated lives in the context of family, community, and personal ambition, and also happened to love each other. Gordon Warnicke, who plays Omar, is not done any favors by the green filmmaking. I've never actually seen him do anything else to learn whether he is any good as an actor. But Daniel Day Lewis is quietly charismatic - acting on, in, and around the lines. Always alive. It is striking to see this film along with another film with the young Daniel Day Lewis that came out at exactly the same time - Merchant-Ivory's A Room With A View, the adaptation of the E. M. Forster novel, in which he played the priggish Cecil. Truly a brilliant film. I first saw the two films in the same week, and Day Lewis is so completely different in them I didn't even know it was the same actor. Watching the two back-to-back makes for a starkly contrasting pair of films.
Posted by Ted at 8:21 AM