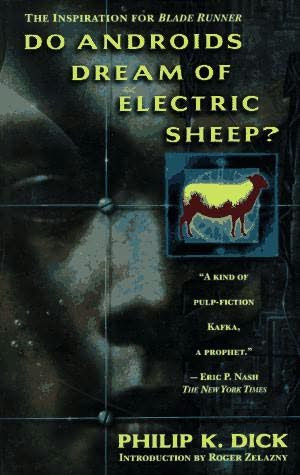 Following my re-read of Flow My Tears, The Policeman Said just a few weeks ago, I decided to give another of Philip K. Dick's books a second look and began Do Androids Dream of Electric Sheep before going to sleep. If the man could do nothing else, he can sure come up with a title. This 1968 sci-fi thriller is set in what is now the not so distant future, 2021. Post apocalyptic earth is littered with fallout and houses only the portion of the human race that has not emigrated to other planets. In addition, there is a race of androids and our hero, Rick, has been hired to "retire" some of them.

Two features of Dick's imagined future stand out to me - Rick and his wife each have something called a Mood Organ, on which one can dial-up to regulate ones hormones and neurotransmitters to produce a specific mood either on-order, or one can pre-program a schedule.

"I'll dial what's on my schedule for today." Examining the schedule for January 3, 2021, he saw that a businesslike professional attitude was called for. "If I dial by schedule" he said warily, "Will you agree to also?" He waited, canny enough not to commit himself until his wife had agreed to follow suit.

"What? Why did you schedule that?" It defeated the whole purpose of the mood organ. "I didn't even know you could set it for that," he said gloomily.

"I was sitting here one afternoon," Iran said, "and naturally I had turned on Buster Friendly and His Friendly Friends and he was talking about a big new item he's about to break and then that awful commercial came one, the one I hate; you know, for Mountibank Lead Codpieces. And so for a minute I shut off the sound...At that moment," Iran said, "When I had the TV sound off, I was in a 382 mood; I had just dialed it. So although I heard the emptiness intellectually, I didn't feel it. My first reaction consisted of being grateful the we could afford a Penfield mood organ. But then I realized how unhealthy it was, sensing the absence of life, not just in this building but everywhere, and not reacting - do you see? I guess you don't. But that used to be considered a sign of mental illness; they called it 'absence of appropriate affect.' So I left the TV sound off and I sat down at my mood organ and I experimented. And I finally found a setting for despair." Her dark, pert face showed satisfaction, as if she had achieved something of worth. "So I put it on my schedule for twice a month; I think that's a reasonable amount of time to feel hopeless about everything, about staying here on Earth after everybody who's smart has emigrated, don't you think?"

Mental illness was on of Dick's obsessions as a writer. As I mentioned in my review of Flow My Tears... Dick may be imagining the future, but his real subject is his own present. Mood altering drugs were less sophisticated in the 1960s but no less available. There were accepted varieties for one class - Valium, alcohol, nicotine, barbiturates - and a different sort for those outside the mainstream - marijuana, LSD, etc... And complete control of one's every mood seemed not such a stretch, for a future 50 years hence. Indeed, today we can and do control mood and consciousness with drugs ever more subtly. In some ways this is much to our advantage - better anesthetics, better drugs for schizophrenia and depression. And in others there are still those of us who are harboring fantasies of being cured of all feeling and any difference we have from others.

The second feature of Dick's imagined 2021 I was struck by was his version of keeping up with the Joneses. It consists not of coveting thy neighbor's car or television but instead, their animals. In his imagined world, people aspired to own animals - people of means owning the larger farm animals and letting them graze on the roofs of their skyscrapers. Those who could not afford a horse or sheep, could either settle for ordering a mouse or a cricket, or they could purchase android animals (hence the 'electric sheep' of the title).

This novel was adapted for the Ridley Scott film Blade Runner. This is my second reading of the novel and I saw the film as well, but right now I am not remembering very many specifics of the plot, although I have some vague hints. Perhaps we could work on those drugs for memory...
Posted by Ted at 7:48 AM

Interesting take. Imagine being able to program a limited time for feeling despair. But then it's not really your own despair, it's an artificial despair.

I've also been re-reading Dick and looking at some of his unpublished realistic novels this year. Interesting stuff. He keeps coming back to the question of how do you deal with a reality you're forced to live in, even if you don't believe it's real. This kind of "paranoia" is present even in the realistic novel I read.