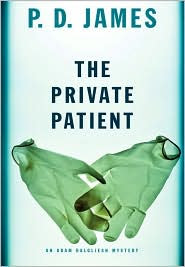 I'm about one-third of the way into P.D. James's latest and she writes with the confidence of someone who has earned her place as the reigning master of the intellectual English mystery. Her descriptions do not walk so much as process down tree-lined avenues. There is a deliberateness, a thoroughness to her writing that, in The Private Patient, is accompanied by retrospection. Legacy, memory, age, whether of house, city, or a character, is the preoccupying theme of this book.

The lease was long and renewable; she would have liked to buy the house, but knew that it would never be for sale. But the fact that she couldn't hope to call it entirely her own didn't distress her. Most of it dated back to the seventeenth century. Many generations had lived in it, been born and died there, leaving behind nothing but their names on browning and archaic leases, and she was content to be in their company.

The City which lay below was a charnel house built on multi-layered bones centuries older than those which lay beneath the cities of Hamburg or Dresden. Was this knowledge part of the mystery it held for her, a mystery felt most strongly on a bell-chimed Sunday on her solitary exploration of its hidden alleys and squares? Time had fascinated her from childhood, its apparent power to move at different speeds, the dissolution it wrought on minds and bodies, her sense that each moment, all moments past and those to come, were fused into an illusory present which with every breath became the unalterable, indestructible past.

And then, the set-up:

It was now eight-thirty and she was in her bathroom. Turning off the shower, she moved, towel-wrapped, to the mirror over the washbasin. She put out her hand and smoothed it over the steam-smeared glass and watched her face appear, pale and anonymous as a smudged painting. It was months since she had deliberately touched the scar. How, slowly and delicately, she ran a fingertip down its length, feeling the silver shininess at its heart, the hard bumpy outline of its edge. Placing her left hand over her cheek, she tried to imagine the stranger who, in a few weeks' time, would look into the same mirror and see a doppelganger of herself, but one incomplete, unmarked, perhaps with only a thin white line to show where this puckered crevice had run. Gazing at the image, which seemed no more than a faint palimpsest of her former self, she began slowly and deliberately to demolish her carefully constructed defences and let the turbulent past, first like a swelling stream and then a river in spate, break through unresisted and take possession of her mind.

All of James's books invest in a thorough set-up with lots of insight into character, which I love, but I find this one particularly unhurried. No pressure here except to get the job done - to introduce each character in turn and each plot-line with equal care and the tone proper to their circumstances. Some are to be essential to solving the mystery, others are, no doubt, destined to become red herrings, but to stint on any of them would be to give away which is which. James spends 100 pages making us acquainted with the investigative journalist Rhoda Gradwyn, the renowned plastic-surgeon George Chandler-Powell, hired to remove Rhoda's own legacy - a scar she has had since childhood. James spends a chapter on each member of the staff of Chandler-Powell's private clinic, housed in his historic manor in Dorset.

I don't think it is merely coincidental that P.D. James as an older writer is writing about time, about age, but I also don't think it is a merely a preoccupation with self. The past is, I'm sure, going to be essential to solving the mystery. In the same way, I don't thing that the fact that the writing here is methodical is a quirk of James's style through which we have to suffer to get to the good stuff. It is a deliberate voice chosen to express the way that Chandler-Powell and Rhoda Gradwyn are methodical. Both are characters who have come out of chaos in their pasts and have reacted to it by putting a good amount of control into their lives. The routine of their work, their weekly schedule, the food they eat and when they eat it, each of these aspects of their lives is highly controlled and has an old-fashioned rhythm to it. So it is a surprise when, following the surgery, Rhoda suddenly sees a ghostly figure around her bed making ritual gestures just prior to murdering her (this is not a spoiler, we know she will die from the first sentence of the book). I really like this touch for two reasons - this otherworldly figure clad in white could be a nurse, surgeon, or someone who has taken surgical scrubs, mask, and gloves from the premises and who is seen through Rhoda's post-anesthetic haze - it could also be something otherworldly bursting through the protective veneer of these controlled lives just at the moment of the crime. As though it reaches through, perhaps from the past? I don't know yet. But the book's tone changes with the crime - as lives change as the result of a murder - and with the introduction of detective Adam Dalgleish and his team comes a more modern-day percussive, chaotic rhythm. Murder cuts into Gradwyn's world and keeps her new face an eternal mystery.
Posted by Ted at 7:56 AM