It's in the air... (Books - The Invention of Air by Steven Johnson) 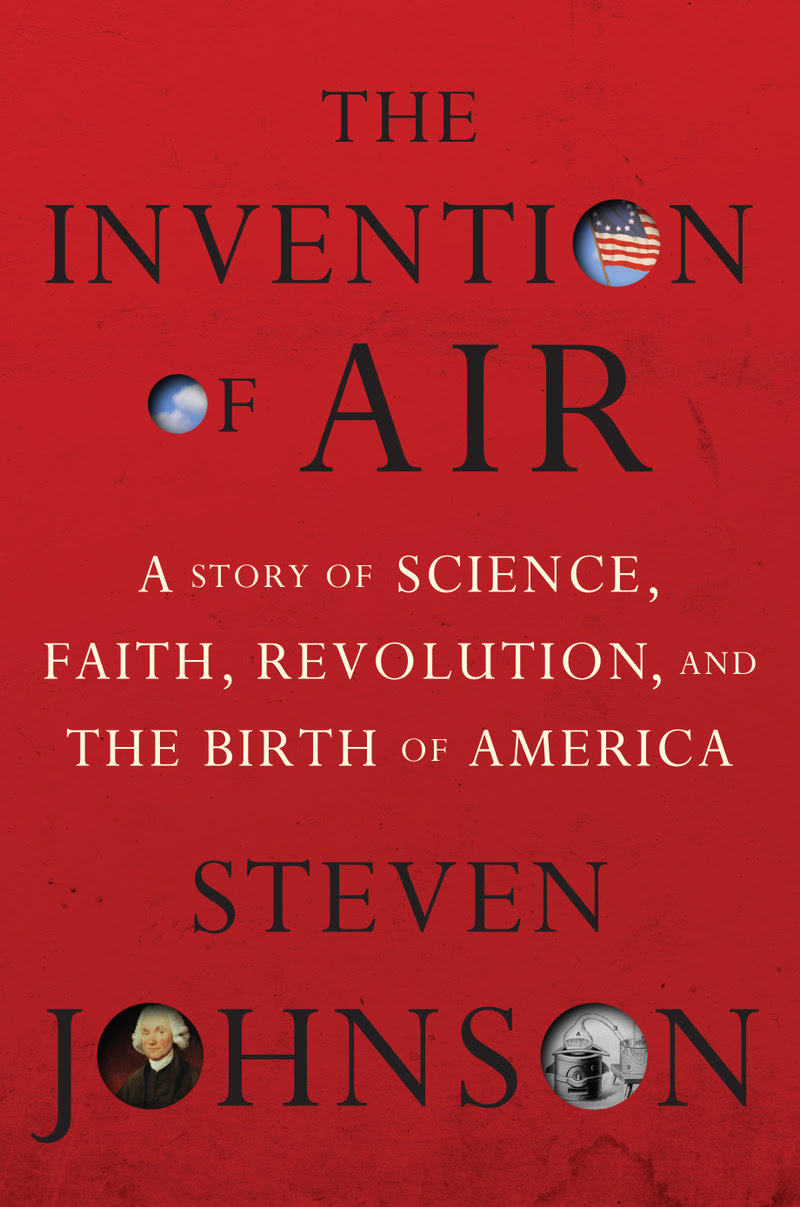 After six hours writing a paper yesterday about a brain structure called the superior temporal sulcus, you might not think I'd be much in the mood for reading about science, but actually I felt primed to read Steven Johnson's latest, so skilled is he at making a narrative flow of scientific ideas and the era in which they gain acceptance. His new book The Invention of Air exemplifies this. Here he tells the story of Joseph Priestly, who started his life of scholarship by writing a book of English grammar, next studying electricity, learning many of the basics from another polymath, Benjamin Franklin. Priestly wrote a 700-page book on the electricity which became the seminal text on the subject for the next century. Priestly was involved in the discovery of ten 'airs,' we would call them gases, including oxygen, nitrous oxide, and carbon dioxide, for which he discovered the ingenious use of carbonating water, influencing the taste of future generations in ways he could hardly have imagined. But Johnson's life is hardly a conventional biography. What Priestly's life becomes a platform for in Johnson's book is a discussion of the emanation and dissemination of ideas. Johnson marvels not simply at the fact that Priestly, after discussing electricity in a London coffee house with Benjamin Franklin, conducts experiments in his kitchen and writes a lengthy and influential book on the subject, but rather at the character of the book. Scientific writing until that time was in the form of a philosophical argument and proof and if Newton's Principia is the prime example, it was written in Latin. Priestly, although fluent in seven languages, wrote his book in English in the form of a narrative:

But his History was as much a breakthrough for its form as for its content. He had invented a whole new way of imagining science; instead of a unified, Newtonian pronouncement, Priestley recast natural philosophy as a story of progress, a rising staircase of enlightenment, with each new innovation building on the last. In his prologue to the History, he contrasts his method favorably with the existing genres of civil history and natural history: the epic stories of kings and wars and famines, or the meticulous inventories of nature - insects, rocks formations, flowers - that had become commonplace over the preceding century. There were great lessons and pleausres to be found in those other forms of writing, Priestley argued, but they lacked the definitive movement toward clarity and understanding that could be found in his own philosophical history...

The story of scientific narrative is one of two themes Johnson mines in his opening chapter. The second is the notion of innovative streaks, both on the individual and societal level. Why do a few people seem to have a disproportionate share of the big ideas, Johnson asks, and why does the popularization of those ideas seem to occur in bursts. This is a discussion Johnson covers ably in fifteen pages of easy and even amusing narrative. He puts the theories of Thomas Kuhn's 1962 book The Structure of Scientific Revolutions, which imagnes a small center of change, starting in the lab with the scientist and radiating outward, alongside the notion of the ecosystem:

Ecosystem theory has changed our view of the planet in countless ways, but as an intellectual model it has one defining characteristic: it is a "long zoom" science, on that jumps from scale to scale, and from discipline to discipline, to explain its object of study: from the microbiology of bacteria, to the cross-species flux of nutrient cycling, to the global patterns of weather systems, all the way out to the physics that explains how solar energy collides with the Earth's atmosphere.

This interconnected network model is a favorite of Johnson's - how ideas move for the cellular networks of the human brain to cultural systems like the economy, to massive forces like energy. This notion, contrary to Kuhn's, sees large pattern of changes occurring when large simultaneous cultural forces align or, you could say, when the notion is 'in the air.' Johnson, with a nod to Tom Standage's book A History of the World in Six Glasses, half-jokingly credits the emergence of the coffee house culture with the birth The Age of Enlightenment. Starbucks, take note.

I had looked at both Johnson's book and another - Julia Glass's novel I See You Everywhere on the same evening in a bookstore a couple of weeks back. Both are new and in nicely designed hardcover editions, with attractive jackets. Both are of a size agreeable to hold in ones hand, but it was the end of the semester and I was hardly likely to start them immediately, so I ordered them on line. Having first admired them, and then waited for them, and then placed them on the to-be-read-sooner-rather-than-later pile I had enjoyed anticipating them, particularly Glass's novel whose opening pages had a warm, comforting feeling to them. I found myself almost loath to begin I See You Everywhere so much had I enjoyed my anticipation of it. But start I did and now having written about Steven Johnson writing about Priestley writing about science, I have a little writing about science I should do myself. So I will force you to anticipate my thoughts on Julia Glass's new novel until later.
Posted by Ted at 8:30 AM

I've been eyeing this one, so I was excited to see your review in my Google Reader! It sounds neat, and who doesn't love Kuhn?!

I'm glad to see that science-y books are making their way around the blogosphere, and I think I may have to add this one to the pile sooner rather than later!

I notice a number of George Eliot novels on your lists, read and unread. Perhaps you know that Julia Glass cites Eliot and Daniel Deronda in particular, as influences?