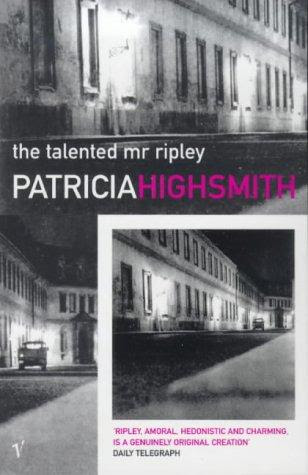 I have seen the film adaptation of Patricia Highsmith's The Talented Mr. Ripley more than once and I am aware that she has written several other Ripley books, so why did I feel such agonizing suspense while reading the last 100 pages of The Talented Mr. Ripley? Tom Ripley really is a horrible person - he's a monster, a murdering psychopath with no conscience, you might say no soul. So why did I care so much for him not to be caught? I think Patricia Highsmith accomplishes these feats not by distracting me and getting me to overlook them, but by building detail-by-agonizing-detail Tom's love for Dickie Greenleaf, Tom's pain at his own ostracism, Tom's feeling left out when Dickie spends time with Marge..but then (and there are spoilers here if you don't know the story) he commits murder and not satisfied with that, he forges Dickie's signature, steals his monthly trust check, adopts his name, wears his clothes and lives life as the man with whom he was obsessed, committing another murder along the way (spoilers over).

The passposrt inspector stamped his passport after only a quick glance at him, though Tom had lightened his hair slightly with a peroxide wash and had forced some waves into it, aided by hair oil, and for the inspector's benefit he had put on the rather tense, rather frowning expression of Dickie's passport photography...

He felt alone, yet not at all lonely. It was very much like the feeling on Christmas Eve in Paris, a feeling that everyone was watching him, as if he had an audience made up of the entire world, a feeling that kept him on his mettle, because to make a mistake would be catastrophic. Yet he felt absolutely confident he would not make a mistake. It gave his existence a peculiar, delicious atmosphere of purity, like that, Tom thought, which a fine actor probably feels when he plays an important role on a stage with the conviction that the role he is playing could not be played better by anyone else. He was himself and yet not himself. He felt blameless and free, despite the fact that he consciously controlled every move he made. But he no longer felt tired after several hours of it, as he had at first. He had no need to relax when he was alone. Now, from the moment when he got out of bed and went to brush his teeth, he was Dickie, brushing his teeth with his right elbow jutted out, Dickie rotating the eggshell on his spoon for the last bite. Dickie invariably putting back the first tie he pulled off the rack and selecting a second. He had even produced a painting in Dickie's manner.

This, it seems, is Tom Ripley's talent - assuming each detail of the manner of someone's character so as to convince others and even temporarily himself that that is who he is. I love the fact that he practices behavior like brushing his teeth, that no one who has known Dickie Greenleaf will actually ever witness (very "method"). If he knows he is going to tell someone, say a police lieutenant, that he spent a night in his car while visiting the small towns of northern Italy, Tom Ripley will actually spend the night in his car so that when he says it, he has really done it. - This is also Patricia Highsmith's talent - building conviction through detail, not taking narrative shortcuts. Although I'd rather not ask what kind of preparation she has done to get inside the mind of this character! She writes each nod, each glance of a three-way conversation, but does not assume our stupidity and overexplain the significance of what we hear and see. The novel has the feeling of watching something through a keyhole seeing it all and knowing you could be caught, which is just the feeling Tom Ripley has. It is an intensely suspenseful read, even as I was making a sauce for dinner yesterday, I had the novel on the kitchen counter, reading the final thirty pages as I stirred and prepared the salad. I have already requested the next book in the series from the library. They also have a biography of Highsmith and, I must admit, I am curious.

My other posts on The Talented Mr. Ripley are here, here, and here.
Posted by Ted at 8:54 AM