Yesterday, April 15th, was Tax Day here in the U.S., which means lots of lucky people will get refunds of over-paid taxes. Whether you’re one of them or not, what would you spend an unexpected windfall on? Say … $50? How about $500? (And, this is a reading meme, so by rights the answer should be book-related, but hey, feel free to go wild and splurge on anything you like.) 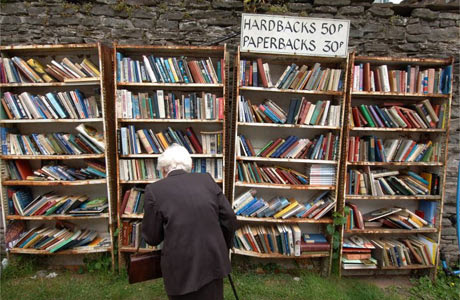 Let's see, with $50 I might get another novel by William Trevor, after reading the beautifully written Fools of Fortune last year, and I would finally find The Levant Trilogy by Olivia Manning which is the follow up to her The Balkan Trilogy, which I read for the Outmoded Authors Challenge in 2007-8. The Balkan Trilogy was the inspiration for the BBC series Fortunes of War and I really tore through those 900 pages - I loved it! And after Dovegrey's review, I would find copies of Charles Lambert's Little Monsters and The Scent of Cinnamon. I don't think $50 would get me any further than that. $500 unfortunately wouldn't even buy a ticket to London so that I could track down those last three books myself, but I will pretend that it will. Or, no, I would use my huge refund to go to the Hay Festival - I have always wanted to go. This year I would have the choice of Granada or Wales! And there I would buy armloads of books which would include the above, a biography of Patricia Highsmith, Marghanita Laski's The Victorian Chaise-Longue, Molly Fox's Birthday, Clifford Odet's play The Big Knife, and I would attend the theatre and the opera in Wales before heading home. And now that I have indulged that little fantasy, it's time to get ready to go to the lab and work on a paper.
Posted by Ted at 7:22 AM

OH! OH! OH! Take me with you to Wales' Hay Festival :-D I've never been to either, Wales or a big book festival.

I am actually going on vacation in September and will be in London, then Scotland, and then end in Wales.

I would love to visit Wales :)
Dunno what the festival is but sounds nice