National Library Week is upon us...

I saw that National Library week is coming up in April, and that led to some questions. How often do you use your public library and how do you use it? Has the coffeehouse/bookstore replaced the library? Did you go to the library as a child? Do you have any particular memories of the library? Do you like sleek, modern, active libraries or the older, darker, quiet, cozy libraries?

I grew up being taken to the library weekly for storybook hour and then later going myself to the local library, my school library, and also the bookmobile, which had the added mystique of being both an outfitted vehicle and a library. There was a long period during which I relied much more on bookstores, particularly when I lived in Chicago - although the new main library that opened when I lived there was gorgeous (that's the top picture on the left). I did use that fairly regularly. When I was working at Lincoln Center I used the Library for the Performing Arts constantly. They also have a couple of nice gallery spaces, performing spaces, and listening stations for recorded music and plays as well as viewing facilities for the dance and theatre collections. 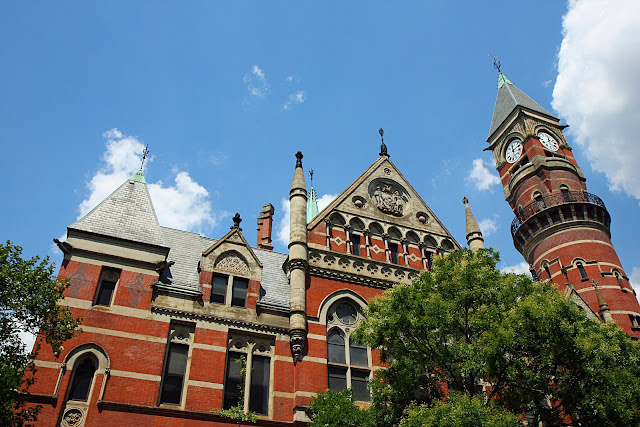 Nowadays, my local branch libraries are not very well kept up. They have surly, beleaguered staff, and they seem to double as homeless shelters. Others are very nice - the Jefferson Market branch in Greenwich Village is a beautiful building (second picture down on the left). Now I tend to do my browsing for books and films on the library website and request them to be sent to a convenient branch. I receive an email when they have arrived and I go and pick them up. I do love sleek modern libraries, but the most important thing is that they are welcoming, take care of their books, and are decently lit. 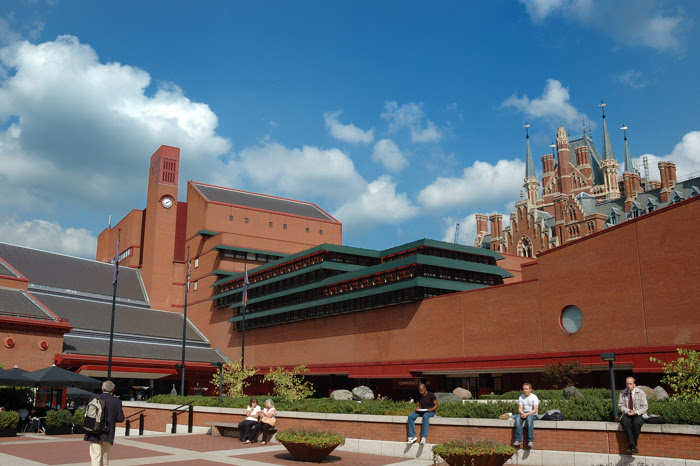 Although I have visited libraries in other cities with comfy chairs, I have yet to find a New York library that I would call comfortable. The nicest furniture tends to be at the computer stations (what does that tell you?). London's brand new British Library (third picture down on the left) is pretty striking.

I used to go to my favorite bookstores weekly. Now I go whenever I'm near them, although I will occasionally make a trip specifically to go to a bookstore, or its cafe, and just work there for an afternoon. I love bookstores and if I am visiting another town will seek out a non-chain bookstore to browse in (and maybe pick something up too) . I will even go to bookstores in countries where I can't read the language. It gives me a feeling for what the place's inhabitants are thinking about.
Posted by Ted at 7:09 AM

I love libraries -- and the older libraries in big cities appeal to me.

I love the little independent bookstores. We have one here in town that is a great place to visit on a Saturday afternoon.

I was such a magnet to libraries when I was young. I still remembered that sensation of getting my library card---that felt so privileged and special!

I love reading my own books at the library these days! :) That said, I'm justified to visit my favorite bookstores almost every other day.

I love libraries too, but I rarely go to the ones in my own city now. Many of the branches have more videos and dvds than books, which saddens me. I think the Chicago Library is fantastic -- I always look for those incredible gargoyles to appear over the L tracks as you come into the Loop from Midway. Can't help but smile. The new British Library, (which I think has been opened for almost 10 years now) is fantastic. One of my favorite pictures of my son was taken in front of a statue of Newton in the courtyard there, a 12 yr old looking at a book at the feet of one of his heros. Libraries are frequently mandatory stops on our vacations.

Cam - I didn't realize that the "New" British Library was that "old."

Matt - I wish our public libraries were nice enough to want to bring my own reading to them. One of my school libraries is fairly nice, though. So I sometimes read there.