Classes + 3 experiments + seeing patients has thrown me into overdrive and my entire schedule out of whack. It is leaving me much less time for reading not related to school. When I do find the time, it seems to be in smaller chunks because I fall asleep - I can't get up a good head of steam on any of my reading right now much as I enjoy the few minutes I can snatch each night. Lately I've been flitting back and forth between books already started and a bunch of recently acquired treasures:

I have written about Christopher Fowler's less than ordinary detective team - Bryant and May - and their Peculiar Crimes Unit
before here and here. When all other units fail, this rag tag bunch of thinkers-out-of-the-box handles crimes that don't fit the conventional mold. Fowler combines a good sense of comedy, an enjoyment of London history (the theatre during WW II, underground waterways, and now the venerable institution of the English pub), and a well-plotted mystery. I have been looking forward to another one. The Victoria Vanishes opens with a murder that gives an example of the way Fowler's writing combines a good sense of atmosphere and an intense energy:

It was ridiculous, she was surrounded by people but the noise of laughter and conversation was drowning her out. The crush of customers made her even more invisible. He was hurting her now. She tried to squirm out of his embrace.

Something stung her face hard. She brought her free hand to her cheek, but there was nothing. It felt like an angry wasp, trapped and maddened in the crowded room. Wasn't it too early in the year for such insects?

And then he released her arm, and she was dropping away through the beery friendship of the bar, away from the laughter and yeasty warmth of life, into a place of icy, infinite starlight. 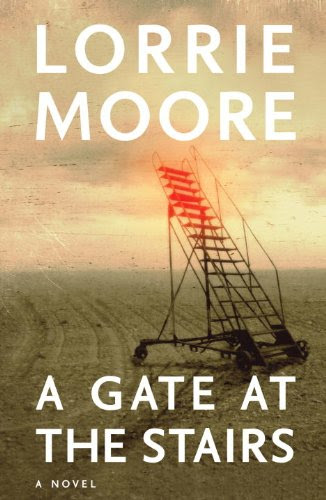 I am struck currently in Lorrie Moore's A Gate at the Stairs by the character of Sarah - a white, yuppie restaurant owner who adopts an African American child. She ends up, because she experiences the racist comments of some of her neighbors, creating a support group for multi-racial families. Moore can at once treat the subject seriously and mine it for great comedy. We experience the group meeting through Tassie's ears - the college student hired to babysit Sarah's adopted daughter Mary-Emma - as a desultory stream of empty rhetoric about Muslims, black hair, racism, vegetarians, Jews, Karl Rove, Pete Seeger, and humane treatment of chimpanzees. The group seems, like the adoption, to be another of Sarah's empty promises. It's full of the surface of the thing, but not the intellectual focus or the depth of love needed to do it seriously. Just like television. I laugh at Moore's script of these meetings, but I cringe too as this is Tassie's coming of age story and rather than an environment rich in love, good or outlandish taste, complex political discussion (conservative or liberal), or even drugs or music, it is filled with an unloved baby, a loveless marriage, professional ambition, uninformed fear of others, college courses in wine tasting, and people who cannot talk to each other. They engage in parallel monologues so empty of substance that the air can be heard to whistle through them.

I wanted to write about Margaret Drabble's new memoir The Pattern in the Carpet too, but I am going to hold off on that as I have to get to the lab (yes, on Sunday).
Posted by Ted at 8:05 AM