We just spent four days at the wedding of friends in the UK, so I've been off the net but had two transatlantic flights and jet lag to give me a little more reading time than has been possible lately and I got through a Margery Allingham mystery, half of Ward Just's The Translator, and a cute book, mostly of photographs, about Picasso and his daschund, Lump.

Police at the Funeral was my first Margery Allingham mystery. She is a classic, 1930s English mystery writer whose works have been reissued by the publisher Felony & Mayhem. She has a strong talent for plotting but I found her writing pedestrian, unsurprising, and sometimes carelessly repetitive. This is the fourth in a series of mysteries featuring a wealthy young detective called Albert Campion, but I left the world of this book behind knowing very little about what he looks like or how he solves his mysteries. Unlike her sister in crime Agatha Christie, Allingham has not created for this reader a strong impression of who her detective is. This story concerns a wealthy family ruled by a strong-willed matriarch, whose members are being knocked off one by one in circumstances that lead one to believe it is an inside job.

"There's rank evil there," he went on unexpectedly, fixing his bright eyes on the other's face and speaking with an intense sincerity which finally removed any trace of his former frigidity.

"There they are, a family forty years out of date, all vigorous energetic people by temperament, all save for the old lady, without their fair share of brains, and herded together in that great mausoleum of a house, tyrannised over by one of the most astounding personalities I've ever encountered. Imagine it, Campion, there are stricter rules in that house than you or I were ever forced to keep at our schools. And there is no escape."

Well, evidently there is, and that escape route is the subject of this mystery, which never rose above the level of a quaint period piece for me, but kept me entertained nonetheless. 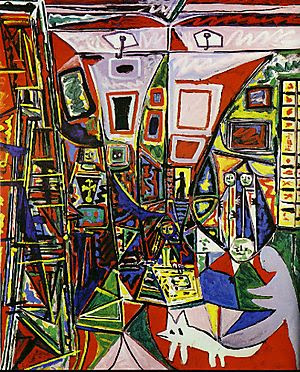 While visiting with our friends, I also read in a single sitting the 1957 picture book by David Douglas Duncan Picasso and Lump: A Daschund's Odyssey. It tells in photographs of the friendship between Pablo Picasso and his dog Lump. It is a charmer of a book particularly if, like me, you can't resist a daschund. Between this book and our friends' 6-month-old Portuguese Water Dog Caesar, there was a lot of puppy-love this wedding weekend and I can never get enough of that.
Posted by Ted at 10:58 AM