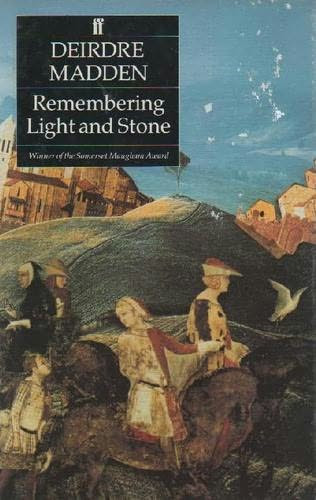 My penultimate read of 2009, Remembering Light and Stone, had some themes in common with my previous read - The Translator. Both were written in the early 1990s by authors I discovered in 2009 - Ward Just I discovered through his latest novel Exiles in the Garden and Deirdre Madden through Molly Fox's Birthday. Both reading experiences immediately encouraged me to read two more books by the author. And these, the third books I read by each, explored the experience of exile in ones life and were set around the time of the falling of the Berlin wall, observing individual lives in the context of world-scale changes. They were both the products of inquiring minds and made for rich and pleasurable reading. That said, they were nothing alike.

The Translator has a breadth of focus that makes it a book about the world via the story of an individual life, I link to my post on it above. Remembering Light and Stone is an intensely private work. Reading it is to become intimate with its subject, Aisling, an Irish woman who has moved by choice first to Paris and then to the small Umbrian town of San Giorgio. The story is that of an immensely sensitive person who feels an exile from the world, at odds with life as it is expected to be lived, whether in her native country of Ireland or in her adopted country of Italy. And one could say, that is all. But that makes this sound a scant novel and I found it rich and deeply personal.

One day I was out in the car with my father. He was driving to the next village to collect a piece of farm machinery. I was on holiday from school, and he had asked if I wanted to go with him so I'd said yes. He didn't say anything as we drove along. My father didn't talk much at any time, and I often used to wonder what he was thinking. I prattled on to him for a bit, then I fell quiet. I started to do the same thing that I would do on the bus. I wiped from my mind all memory of my father, and pretended he lived in a different place, perhaps with another family, perhaps on his own. Maybe he wasn't a farmer but a lorry driver, or a man who owned a shop. I looked at his thick fingers gripping the steering wheel, and I wondered what he sold, groceries or hardware. I imagined him wearing an overall the colour of a brown paper bag, and people coming to him to buy hammers and nails and tins of paint. And then suddenly it wasn't make believe anymore: this man was a total stranger. I was terrified. 'Who is this person?' I thought. 'Where is he taking me? What will he do with me when he gets there?' I looked up at his face. His heavy brow was angry and cruel. 'Stop the car, please,' I said. He glanced over at me. 'What is it, Aisling?' he asked. 'Don't you feel well?' but although he slowed down, he didn't stop. I still didn't trust this man. 'Stop the car!' I screamed, fumbling with the locks to get out, and this time he did, the brakes screeching. I already had the door of the car open, and the sight of the road moving beneath me frightened me so much, I let the door slip closed again, and started to cry.

Not only can you get a sense of the precision and the quotidian feel of Madden's writing from this paragraph, but the episode from Aisling's past defines the very core of her. Someone whose mind allows her a powerful ability to see the nature of things - people's deepest thoughts, the way some art captures the era from which it comes - to these Aisling is powerfully sensitive - but the cost of her vision can be a profound insecurity, particularly in the kind of things most people take for granted. This seems meto the very essence of an artist's vision, but Aisling is not an artist and has neither the outlet of a medium for her potent thoughts nor that identity to offer her a place in the world. It is her reckoning with her sense of difference that is the subject of this strong and compact novel. That is not to say it is all serious, Madden's Aisling winks at the reader from time to time:

I won't say anything about whether or not I slept with Ted that night. Even if I did say, it would be foolish to believe me, because everybody tells lies about sex, and I'm no exception.

But Madden herself is every inch an artist - aware of her form, precise in her diction, a consummate creator of characters who are both idiosyncratic and ordinary, and deep in the insight she sheds on the experience of those human beings. I cannot recommend her work highly enough. I am now enjoying her first novel Hidden Symptoms, which I hope to report on some time in the next two days. It will be the fourth work of hers that I read this year and my 52nd book, closing out the year with a round 1 book per week.
Posted by Ted at 5:51 PM