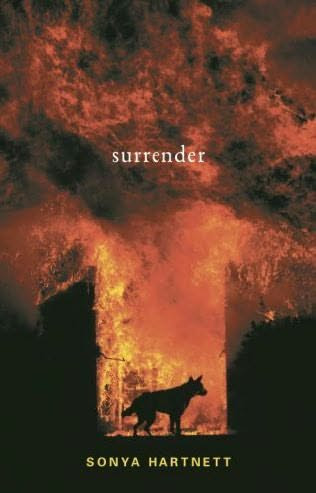 Laid up with a champion case of bronchitis, I've been alternating my school work with Thomas Mann's TB sanitorium antics in The Magic Mountain (appropriately enough) and I thought, I could use something a bit less... phlegmatic. Little did I suspect that Sonya Hartnett's Surrender would also feature one of two narrators with a disease resembling TB, but the book is so good that I wasn't discouraged from finishing it. I read her What the Birds See last year. She is an Australian author writing for and about children who find they don't fit the molds life provides for them. She does so with lyricism and imagination instead of the ridiculously pedantic messages I so often see in books for young people about how they should behave. Surrender is a literate novel told by two alternating first-person narrators - Gabriel the angel and Finnegan the wild demon - at least one of them, we are warned, is not necessarily trustworthy.

I am Gabriel, the messenger, the teller of astonishing truths. Now I am dying, my temperature soaring, my hands and memory tremoring: perhaps I should not be held accountable for everything I say.

As Gabriel lies in bed dying, he and Finnegan remember the events of their relationship that lead up to the heavily veiled circumstances that are the book's substance. We don't know precisely where we are or what has lead up to our being here. This creates in Hartnett's hands suspense rather than confusion - suspense that pulled this reader through the twin narratives like a strong magnet. Again her subject is a young person who is painfully alienated from everyone around him. She tells his story of isolation in elegiac strains that most evoked for me William Faulkner or the poet James Wright:

Breathing is an undertaking: it takes minutes to sigh. My rib cage is the hull of a wrecked and submerged ship. My arms, thin as adders, are leaden as dropped boughs. The mattress, my closest friend, has been carved by the knots of my unfleshed bones into a landscape of dents. The soul might rise, but the body pulls down, accepting the inevitable, returning to where it began.

Harnett's angel isn't necessarily always good nor is her demon all bad. This refusal to render black and white judgments on her characters has real purpose and is a strength of the novel. It asks the reader to revel in their ambiguity. Characters who are complex souls, not caricatures or walking illustrations of moral points-of-view, an unreliable narrator, nearly metric prose, place and situation not immediately explained - I know adult readers who would probably find Surrender challenging. But I commend Harnett for writing sophisticated literature for young people that shows them that someone believes that they can read with discernment. Surrender is tight, mysterious, lyrical and tragic - a gorgeous novel for a reader of any age.
Posted by Ted at 6:33 AM

I think Sonya Hartnett follows E B White's directive to write up rather than down to children, which makes her books rewarding for adults as well.

It's interesting you mention Faulkner, I saw Hartnett at the Sydney Writer's Festival last year and she mentioned As I Lay Dying is her favourite book. I agree you can hear echoes of it in Surrender.

Saah - How interesting! I can really believe that she loves As I Lay Dying. What is your favorite book of her's? Or what should I read after these two?

Hi Sheila - I think you would like this book a lot. Really dark and really smart. How's everything down on the shore? Remember, all work and no play makes Jack a dull boy.