Consciousness as the ultimate baseline (Books - i of the vortex - Llinas) 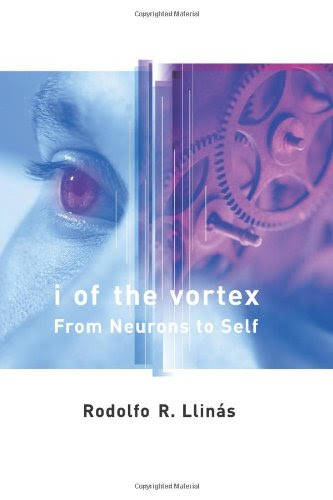 When I last wrote of Rodolfo Llinas's 2001 i of the vortex - a grand plan to explain the concept of self as a product of the brain cells that create it - he had made a case for describing 'self' as the centralizer of the brain states out of which predictions about the world emerge and 'mind' as the internalization of potential movement. If the first half of the book proposes what these two constructs are in the language of the brain, the second half of the book fleshes out how they are accomplished given the evolution of the nervous system from single-celled creatures.

The binding together of events in the external world and internally generated representations of them is accomplished when brain cells are able to fire together. This requires some sort of device that creates a common metric, but not in the sense that a conductor leads the members of the orchestra. This metric is self-generated - like Orpheus Chamber Orchestra - who play without a conductor. Llinas offers his candidate for such a brain process and structure.

Llinas's persuasive argument is a trajectory from a description of fixed action patterns (FAPs) - fixed repertoires of muscle movement that always occur together - to emotions, qualia (the subjective experience of something), to consciousness. Rather than the brain executing separate steps that coordinate millions of neurons and 100s of tendons and muscles to run or lift food to the mouth, they are grouped as a single unit, an FAP, to help the brain economize its efforts - think of macros on your computer. This is an adaptive mechanism because it is not practical to have to plan out how to run from an oncoming car. Llinas proposes that emotions too are a kind communicative FAP - a given state, say fear - elicits emotions and with it, dozens of facial muscles conform in such a way to communicate to any member of our species that a given plan of action is necessary. As Llinas puts it:


The reduction of all possible choices to a useful set of the most probable solutions for the particular situation is a necessary prerequisite to effective behavior. The strategy of reducing choice by picking any solution, regardless of its potential feasibility just to save time, is counterproductive, so natural selection has weeded it out. Another example: what if the control panel of a modern fighter jet had, instead of all those complicated instruments, a little face that tells you how everything is, at that moment, by its expression? You are in heated battle; there is no way that you would be able to look at every instrument and gauge under such conditions. So you have a face - if the face is smiling it means "Do what you must! Don't worry about the condition of the plane, you don't have time!" You need an apparatus that can direct one to focus and choose - and that is consciousness. The face is transforming all the incoming information into one coherent event. Because operating from a single event is always easier, it is far more powerful than continuously having to take into consideration an ever changing set of variables within an ever changing point of governance. That is why there is but one seat of prediction.

Llinas then extends this argument with a leap that describes qualia (subjective experience) as internalized FAPs. If I understand him correctly, he posits consciousness as an experiential baseline against which other qualia can be measured, which makes sense to me since perception is accomplished by the nervous system measuring change and change must always be measured against something.

Llinas then offers two more chapters about the evolution of language and the notion of collective states of mind which, in my opinion, he would have been better off leaving on the cutting-room floor. These chapters are far less well reasoned than the rest of the book. They rely on solipsism and a little too much hand waving and leave the end of an otherwise tight and learned book feeling a little amateurish. He never distinguishes languages from other forms of communication, and the book devolves from a well reasoned thesis to loose musings that make it seem as if Llinas will only be happy if he can write a book that offers a grand theory of absolutely everything instead of a clear argument about the evolution of the nervous system in accomplishing those constructs we call 'self' and 'consciousness.' Minus the final two chapters, Llinas offers a clearly drawn argument, much of which should be accessible to the ambitious lay reader (except for the chapter on neurophysiology). He does so in an almost chattily friendly tone that keeps his narrative moving and offers vivid and pleasurable examples that range from Schumann etudes to Dante's Inferno and the art of Kiki Smith.
Posted by Ted at 9:03 AM