Killing giants, myth busting and other valiant deeds (Books - The Oxford Book of Modern Science Writing & Reading in the Brain) 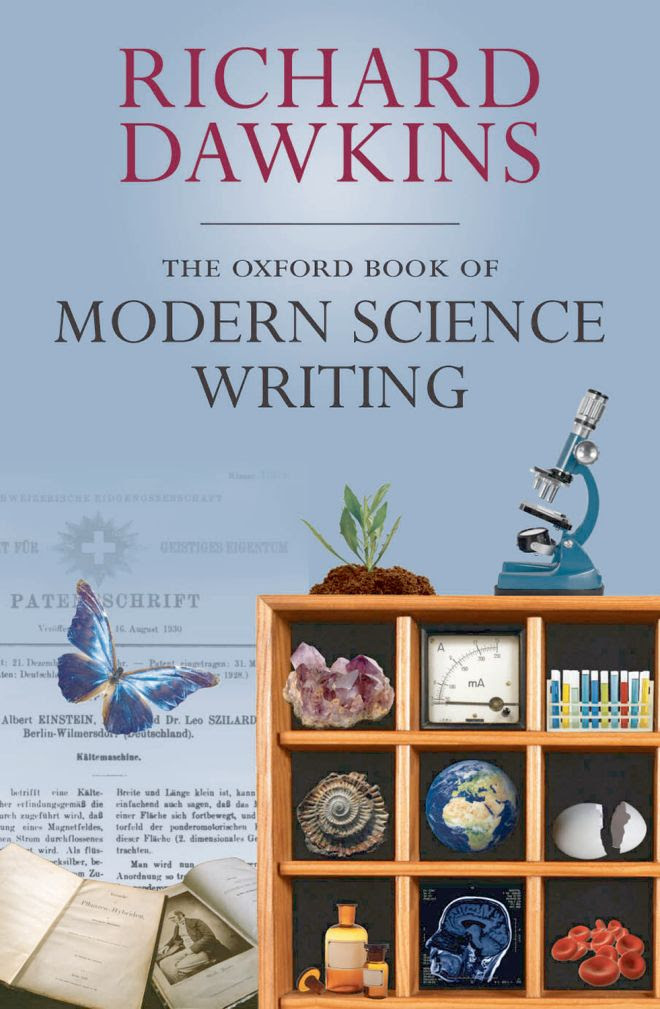 I just came across two excerpts in Richard Dawkins's collection of science writing that reminded me what gives me pleasure about reading science. One is geneticist J. B. S. Haldane's "On Being the Right Size" and the other, Zoologist Mark Ridley's "On Being the Right Sized Mates" from his 1983 book The Explanation of Organic Diversity. Haldane's essay muses on how the physical structure of animals evolved to the "right" size for their makeup. As an example he uses the giants from the books of his childhood,


These monsters were not only ten times as high as Christian, but ten times as wide and ten times as thick, so that their total weight was a thousand times his, or about eighty to ninety tons. Unfortunately the cross-sections of their bones were only a hundred times those of Christian, so that every square inch of giant bones had to support ten times the weight borne by a square inch of human bone. As the human thigh-bone breaks under about ten times the human weight, Pope and Pagan would have broken their thighs every times they took a step. This was doubtless why they were sitting down in the picture I remember. But it lessens one's respect for Christian and Jack the Giant Killer.

I love the fact that Haldane uses his childhood memory of Pilgrim's Progress to communicate to his reader what he is thinking about the physiological evolution of animal life. The best teaching occurs, I think, when the teacher themselves can get back to what initially ignited their own interest about their subject and communicate from that vantage point. Haldane then goes on a musing spree which covers the structure of members of the animal kingdom ranging from insects to giraffes. How an insect's structure allows it to fall without danger, but if it gets wet it is likely to drown. Tall animals require a certain strength pump and vessels for the circulatory system that convey blood to their extremities, however, this puts them at risk for high blood pressure or problems associated with vascular weakness. How do wings permit flight? How do different respiratory structures - those that have evolved with gills and those with lungs - accomplish the oxygenation of blood? And given these diverse means, what are the upper limits of the size of the animal that possesses them? Haldane not only informs us of the vagaries of the natural world we are a part of, he communicates the verve with which he observes that world, and with witty prose drives the reader forward. It is little wonder that he inspired Mark Ridley's observation that species have evolved to favor homogamy, that is, like mates with like. What I enjoyed about this brief essay is Ridley's debunking of the well-entrenched myth that in human affairs of the heart, opposites attract.


'it is a trite proverb that tall men marry little women...a man of genius marries a fool,' a habit which Murray explained as 'the effort of nature to preserve the typical medium of the race.' The same thought was expressed by the vast intellect of Jeeves, to explain the otherwise mysterious attractions of Bertie for all those female enthusiasts of Kant and Schopenhauer. The source of this proverbial belief is not certainly known; but one possibility can be ruled out. It did not originate in observation: humans mate homogamously (or perhaps randomly) for both stature and intelligence.

Myth-busting is not just a darn good time - especially when indulged in with such gusto - but doubting our assumptions is vital to the continued development of our knowledge. This is also another of many instances in Dawkins's juicy compendium in which learning something new is married to lucid, entertaining writing. The danger of this volume, however, is its tendency to bloat the TBR list. I've made it a rule to only jot down my desired titles at this point, and not engage in any impulse buying. We'll see how long that holds! Here are my other posts related to The Oxford Book of Modern Science Writing 1, 2.

I have also begun Stanislas Dehaene's recent book Reading in the Brain and, speaking of gills, it is packed to them with information about how the brain accomplishes the act you are performing right now - reading. An accessible and engagingly written volume. I tore through the first 60 pages. More on that soon.
Posted by Ted at 8:14 AM

Email ThisBlogThis!Share to TwitterShare to FacebookShare to Pinterest
Labels: Book Reviews, Evolution of behavior and the brain, language and the brain, Neuroscience, Reading research

Interesting stuff. I've never bought into the opposites attract idea, though I have known it to work for some couples. I suspect people start out similar and after a couple of decades together end up more or less the same.

Does he talk about people tending to choose dogs that are similar to them? That's an essay I'd like to read.