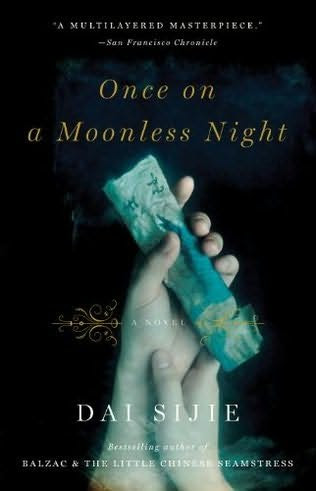 The search for two halves of a torn text, lettered in a mysterious, forgotten alphabet on a piece of silk and dropped from the door of a moving airplane, is the subject of Dai Sijie's Once on a Moonless Night. It is told through a series of diary entries that relate the memories of a woman who escapes her psychic pain by studying languages. This story is of her meeting a greengrocer in Maoist China who tells her a story of his mysterious father, a scholar of ancient Chinese history and texts, who wrote the story of the Chinese prince who once possessed this torn text. This tale is part adventure, part Chinese history, part love story of language. It is about people who literally live for for a text.

Its form is stories nested within stories. The prose is elegant and evocative, but it is complex. This is writing you have to pay attention to if you are to follow the plot:

At the top of the slope, in once white stone blackened by smoke and dust, was a statue of Mao in a raincoat that flapped in the east wind to symbolise political storms, while, perched limply on his head, was a Lenin hat with a visor in proportion to the size of his head, so large that one day a nest of straw and twigs caked in saliva and gastric juices appeared on it, complete with a swallow on a clutch of eggs. From the full height of its twelve metres the statue overlooked a clump of ugly single-storey administrative buildings: a police station from which the occasional isolated cry of despair could be heard as if from a psychiatric asylum; a post office where my grant arrived at the end of each month, a postal order for a pitiful sum; a small hospital; the Revolutionary Council where public records were registered, a haunting, sinister place I sometimes visited in my dreams, where I was married, registered the birth of my child, and where my death certificate was presented; the People's Bank; the People's Militia; the Community Arts Centre; a former library converted into a hall for political studies; and the premises of the Party Committee and the Communist Youth. The profane swallow that appeared on Mao's cap was shot and her nest destroyed. The anti-revolutionary trails of saliva and white droppings that had covered one of his ears, carving a diagonal torrent across his face and streaming untactfully all the way to the leader's astonishingly prominent chin, were meticulously cleaned, but, if the rumours are to be believed, the swallow's ghost, slightly smaller than the live bird, as if shrunken in death, zig-zagged across the sky at night, even in winter, making piercing, mournful sounds like the shriek of a rusted saw, tormenting the ears of insomniacs.

For a while I thought I would not make it through this novel, because the writing demanded so much attention - plot details, atmosphere, historical context, character backstory, flash forward, are jumbled into single paragraphs. Not that I don't love complexity, but the fact that I'm forced to read most of my fiction these days in multiple short sittings, sometimes with several days between them, made the threads hard to pick up. However, I did read the last 150 pages of Once on a Moonless Night in two successive sittings and that is when I found myself getting caught up in the tender, multi-generational love story, the highly convincing fictional scholarship, and the drama of the plot. It is smartly entertaining and satisfyingly multi-layered and I will certainly seek out another of Dai Sijie's novels.
Posted by Ted at 9:42 PM

I read Sijie's Balzac novel (the title has Balzac in it, I don't remember the rest) a few years ago and loved it. I'll definitely go looking for this one.