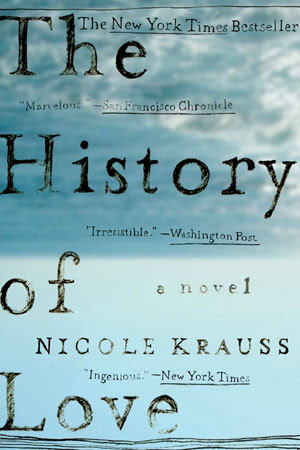 Usually the word bestseller sends me running for cover (I'm such a snob), and I no longer remember what lead me to Nicole Krauss's The History of Love, but it is smashing. Alma, the teenage daughter of a widowed translator is desperate to find her mother new companionship. A mysterious client writes her mother, offering a small fortune to translate a beloved book - The History of Love - written by Zvi Litvinoff who escaped Nazi-occupied Poland for Chile in 1941. Alma, who is named after the book's central character, because it is also a favorite of her mother's, sees in his shared passion for the book, the chance for her mother to find love and she tries her best to engineer that opportunity. Concurrently, an 80-year-old New Yorker, Leo Gursky, Jewish immigrant, also from Poland, whose first and only love was also named Alma, fights for a more beautiful, more hopeful world with his florid, quixotic imagination.

I often wonder who will be the last person to see me alive. If I had to bet, , I'd bet on the delivery boy from the Chinese take-out. I order in four nights out of seven. Whenever he comes I make a big production of finding my wallet. He stands in the door holding the greasy bag while I wonder if this is the night I'll finish off my spring roll, climb into bed, and have a heart attack in my sleep.

I try to make a point of being seen. Sometimes when I'm out, I'll buy a juice even though I'm not thirsty. If the store is crowded I'll even go so far as dropping my change all over the floor, the nickels and dimes skidding in every direction. I'll get down on my knees. It's a big effort for me to get down on my knees, and an even bigger effort to get up. And yet...

Each of the characters, Alma, her mother, her brother (who thinks he may be a holy man of sorts), Leo Gursky , and Zvi Litvinoff, has been wounded by a loss that at once isolates them and drives them to long passionately for kindness, a sense of meaning, the feeling that one is necessary, the love of another. The book feels like a piece of chamber music in that, although its voices harmonize, each individual instrument can be picked out at any time. The leitmotif of this chamber piece is a deeply sad longing. And yet, Krauss's 15 and 80-year-old narrators are not pathetic, they are endearing and, at times, laugh-out-loud funny. That she gets the voice of a literate girl some years younger than herself is not such a stretch, but the way she captured the voice of the 80-year-old, Polish-born locksmith Leo Gursky was uncannily perfect. As a narrator, his voice has made an indelible print on my mind's ear, like Salinger's Holden Caulfield or a Dickens's Pip.

I'd love to go on about this book which is touching, cleverly plotted, suspenseful, and entertaining all at once, but we're two weeks from final exams and I have been hard pressed to find enough time to write a word here these days. So, if I haven't made the case clear yet, The History of Love is a winner. As I'm beginning to think about all those year-end best reads of the year ... posts, this one will certainly take its place on my list of finalists.
Posted by Ted at 7:23 AM

That's so funny - a friend of mine gave this to me for my birthday saying it was her favorite book. Looks like I definitely need to read it soon. It's on my list!