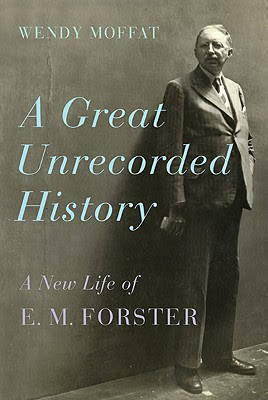 In the opening chapter of Wendy Moffat's A Great Unrecorded History, her new biography of writer E. M. Forster, John Lehmann influential promoter of some of the 20th century's great writers, and novelist Christopher Isherwood, both expat Britains living in California, receive the typescript of Forster's long suppressed gay-themed writings. Included were the novel Maurice (probably known to many people through the beautifully adapted film by Merchant and Ivory) and many other stories, unusual for their open depiction of homosexuality and, in the case of Maurice, their hopeful ending. Forster had a highly successful career as a novelist, but this was built on 5 novels - The Longest Journey, Where Angels Fear to Tread, A Room with a View, Howard's End, and A Passage to India - all completed by the time he was 32.

Looking down at the jumble of pages, Lehmann was "stunned" to see that the revised Maurice typescript was just the beginning. There were masses of new stories "on a homosexual theme, of quite extraordinary power and depth." One - a terrifying love affair between a colonial master and his subaltern lover - could be read as a darker, sexier iteration of the unrealized friendship between Dr. Aziz and Mr. Fielding in A Passage to India. So Morgan had not stopped writing fiction. Indeed, he had composed stories into extreme old age. Christopher was gleeful; John "overwhelmed." Morgan had kept his promise. Christopher felt the future of fiction, and the true meaning of Morgan's life, was in his hands.

Indeed, it is the thrust of Moffat's energetically focused look at Forster's life, that the well-spring of E. M. Forster's humane, observant, and beloved writing, was the fact that this rather shy and ordinary man was born homosexual at a time in history when one's livelihood, if not one's life, depended upon keeping that fact hidden. (There are many places where that is still true and, be assured, there are people who still work in my own country to make homosexuality a reason to be the specific recipient of unequal treatment under the law).

On that spring morning, as always, Morgan looked impeccably ordinary, like "the man who comes to clean the clocks." It was a canny disguise. In the 1920s, his college friend Lytton Strachey had nicknamed him the "Taupe," the French word for "mole." Though he was one of the great living men of letters, in a loose-fitting tweed suit and a cloth cap he slipped unnoticed into the crowd or sat quietly at the edge of the conversational circle. This mousy self-presentation was no accident. Forster came of age sexually in the shadow of the 1895 Wilde trials, and he learned their lesson well.

One of Moffat's talents is her ability to subtly integrate researched facts (she wasn't personally acquainted with most of these people) into sharply written characters who seem to breathe on the page. Forster was a fearful man, we learn in Moffat's biography. He was in his late thirties before he ever had a sexual experience. He lived with his mother until her death and one of his chief reasons for avoiding publication of any of his openly gay writing was that, despite several significant relationships, he was not 'out' to her.

"I am ashamed at shirking publication but the objections are formidable." He was chiefly concerned that the news of his homosexuality would hurt those he loved. As time passed, Morgan's younger friends joined Christopher in making the case to publish. One friend pointed to the example of Andre Gide, whom Forster admired, and who had published explicitly homosexual memoirs. Forster retorted: "But Gide hasn't got a a mother!"

What Moffat admirably accomplishes with this book amounts to more than a biography of an important writer figure. This book succeeds on that front, to be sure, but it is as much a socio-political history of growing up and growing old as a gay man in 20th century England. It is in that context that she examines the content of Forster's best-known writing, how his talents emerged, what he chose to publish and what to save for a readership that would be more disposed to appreciate his work, and how he matured as both a writer and a man to become an outspoken advocate of tolerance, a conscious chronicler of gay life (the unrecorded history referred to in this book's title), and a model for other gay people to live their lives and make their work with greater courage. These included not only the many artists he knew, but bus drivers, policemen, and "respectable upper-middle-class professional men" leading "normal" lives.

Among the pleasures of reading Moffat's well-constructed and swift-moving narrative are the many well-known creators and thinkers Forster met, e.g., Leonard and Virginia Woolf, Isherwood, Benjamin Britten and Peter Pears, Maynard Keynes, Lytton Stratchey, Lincoln Kirstein, as well as some lesser-known artists of whom I enjoyed being reminded and whose work I am now going to seek out like poet Paul Cavafy, painters Paul Cadmus, Jared French, and George Tooker. As well as her frank and non-judgmental depictions of Forsters' chief relationships, particularly the unconventional long-term relationship he sustained with Bob Buckingham. One could, I suppose, fault Moffat for not examining his literary works from any other angle, but other books do that, and her whole thesis is that an understanding of Forster's work is not complete nor is it honest without the inclusion of Forster's sexuality. This influence was the driving-force of his work precisely because it was repressed and it has, until this book, been at best politely referred to, but never so thoroughly and respectfully studied as the formative influence it was to his work as it is here by Moffat.
Posted by Ted at 12:05 PM

This sounds like a book I must get. I read most of Forster's major work, loved it all. And I'm a fan of Isherwood as well.

Adding this one to the TBR list, I guess.

CB, I don't think you will be disappointed.