Dickens Month II - In which the characters, rich and poor alike, attempt to advance themselves (Books - Our Mutual Friend by Charles Dickens) 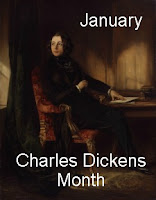 250 pages into Our Mutual Friend and Charles Dickens Month, it has struck me that Dickens is something of a naturalist - sketching studies of his characters that are rich enough in detail so that the reader may see them and that always refer to their habitat.


Reginald Wilfer is a name with rather a grand sound, suggesting on first acquaintance brasses in country churches, scrolls in stained-glass windows, and generally the De Wilfers who came over with the Conqueror...But, the Reginald Wilfer family were of such commonplace extraction and pursuits that their forefathers had for generations modestly subsisted on the Docks, the Excise Office, and the Custom House, and the existing R. Wilfer was a poor clerk. So poor a clerk, though having a limited salary and an unlimited family, that he had never yet attained the modest object of his ambition: which was to wear a complete new suit of clothes, hat and boots included, at one time. His black hat was brown before he could afford a coat, his pantaloons were white at the seams and knees before he could buy a pair of boots, his boots had worn out before he could treat himself to new pantaloons, and, by the time he worked round to the hat again, that shining modern article roofed-in an ancient ruin of various periods.


Assuredly, this stall of Silas Wegg's was the hardest little stall of all the sterile little stalls in London. It gave you the face-ache to look at his apples, the stomach-ache to look at his oranges, the tooth-ache to look at his nuts. Of the latter commodity he had always a grim little heap, on which lay a little wooden measure which had no discernible inside, and was considered to represent the penn'orth appointed by Magna Charta. Whether from too much east wind or no - it was an easterly corner - the stall, the stock, and the keeper, were all as dry as the Desert. Wegg was a knotty man, and close-grained, with a face carved out of a very hard material, that had just as much play of expression as a watchman's rattle. When he laughed, certain jerks occurred in it, and the rabble sprung. Sooth to say, he was so wooden a man that he seemed to have taken his wooden leg naturally, and rather suggested to the fanciful observer, that he might be expected - if his development received no untimely check - to be completely set up with a pair of wooden legs in about six months.

His most juicily funny chronicles are these creatures' attempts at advancement - a key theme in this novel. This is not terribly surprising, as 1865, the year of publication, came hot on the tail of another Charles's book indexing curious species and describing their advancement - Darwin's The Origin of the Species. Many of Dickens's characters are stuck at a particular rung due to circumstances.


"There am I, continuing with father and holding to father loves me and I love father. I can't so much as read a book, because if I had learned, father would have thought I was deserting him, and I should have lost my influence. I have not the influence I want to have, I cannot stop some dreadful things I try to stop, but I go on in the hope and trust that the time will come. In the meanwhile I know that I am in some things a stay to father, and that if I was not faithful to him he would - in revenge-like, or in disappointment, or both - go wild and bad."

So says a character sure to be one of Dickens classic heroines - Lizzy Hexam. While Silas Wegg, our wooden-legged salesman appears to have sold off his body in advance of his death in order to profit from it.


"I have a prospect of getting on in life and elevating myself by my own independent exertions," says Wegg, feelingly, "and I shouldn't like - I tell you openly I should not like - under such circumstances, to be what I may call dispersed, a part of me here, and a part of me there, but should wish to collect myself. like a genteel person."

Wegg recently took a job reading aloud to Mr. and Mrs. Boffins, a poor but loyal couple who were formerly foreman and caretaker for Harmon - the wealthy dust magnate - but are now his heirs as his son has disappeared. Mrs. Boffin dresses herself in gaudy finery to advance her lot. Mr. Boffin has decided he would benefit from some education and has engaged Wegg to read him The Decline and Fall of the Roman Empire. While in possession of a fortune from the inheritance, the Boffins offer a generous reward for the murderer of their former boss's son, take in the Wilfer's daughter in order to introduce her to society, and take on a secretary to help them conduct their business. Little do they know that their secretary is not who he has said he is.

What encourages the acidity of Dickens's satire most is the social climbing indulged in by people already in possession of wealth and position but sure, somehow, that if they could occupy the next highest rung of the ladder, their happiness would be assured. It is not class that separates the climber in Our Mutual Friend from those who are aspirational. The destitute, the genteel poor, the lawyer, and the wealthy business owner all seem equally disposed to advance themselves.

Here is my earlier post on Our Mutual Friend.
Posted by Ted at 5:17 PM

Great post. I'm planning on reading Our Mutual Friend later this year. Thanks!