All tricks and no magic (film - The Illusionist) 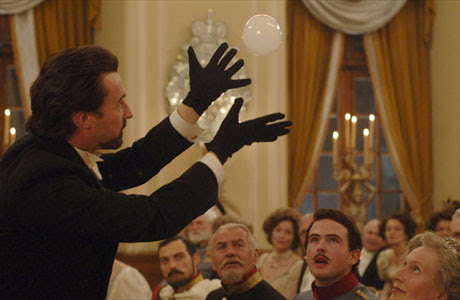 After a day of following charged ions in and out of neurons, I thought I would sit down and watch a different kind of hocus pocus. We borrowed the film The Illusionist from the library. Based on a short story of Steven Millhauser Eisenheim the Illusionist. It featured a promising team - Paul Giamatti, Ed Norton, Rufus Sewell, composer Phillip Glass - alas, it was all trickery and no magic.

Set in fin de last siecle Vienna, a poor boy loves a woman of royal blood. Their friendship cannot be, he travels the world and becomes an illusionist, she the intended of the heir to the throne. He comes back to town to perform tricks, like making the crowned Prince's sword stick in the ground, and the prince does not like that very much - or are they tricks? I won't entirely ruin the plot for you as it is quite good and in case, after this you are still tempted to see the film.

I could have forgiven the film its obviousness if they hadn't done two things - one was to make the setting and period ridiculously dear - you know, people speaking in foreign accents when they are in their home country - why?!? It was interesting watching how the British actors handled accents versus the Americans. Somehow, Sewell was freed by his mask to let something loose akin to character, while it absolutely muzzled Paul Giamatti. Norton was somewhere in between. But when it came to the life beneath the lines, Giamatti and Norton both had an underground fire blazing (sometimes with the flame a little to high), but Sewell (who I've liked in plenty of other films) was reduced to shouting to be dramatic. They also insisted on shooting the whole thing in sepia tones - I know, I know it was supposed to be a long time ago - but could someone please tell me in what year the earth blossomed into technicolor? Because I've never read about it in the history books and you would think someone would have noticed. They had another reason for this choice I won't discuss because it's a spoiler.

The second even bigger gaffe, in my estimation, was an over use of camera tricks - slow-mo shots, moody framing, and especially to try to create the magician's illusions with film. In other words, we see the ghosts materialize, etc... The whole point of this story is to wonder. That people were convinced of his powers is the point, not that he could actually perform illusions. Sometimes, the computer manipulation of the digital image was simply obvious - oops, there goes the illusion. Other times the effect resembled a hologram - we're all used to them from science fiction films now and they carry much different connotations than do the ghostly spectres to an audience of, say, 1899. Oops - no illusion. Showing me the illusions meant not creating them for me. If I had experienced their effect on others - had hints of what he was doing so that I could imagine the rest (as the viewer contributes to the illusion they see), the film would have been much more convincing. Fewer camera tricks and subtler character development would have drawn a little more magic from this film.
Posted by Ted at 8:54 PM

Email ThisBlogThis!Share to TwitterShare to FacebookShare to Pinterest
Labels: film, Other Culture Reveiws

Interesting thoughts, Ted - I've been wanting to see the movie - and I really like your thoughts on illusion. It's interesting: I'm reading part 2 of Simon Cowell's AMAZING biography of orson Welles - he's not done yet - there's gonna be a part 3!! But as I'm sure you know, Orson Welles was obsessed with magic his whole life ... and Cowell goes into some great analysis about what was lacking in Welles' approach to magic, although his enthusiasm was sincere. Great stuff!!

God, I'd love to read that biography! Maybe in 7 years, after I have learned the techniques experimenters use to measure how many little potassium ions can pass through a protein channel. What possessed me?

The great thing about the multi-part biography is first of all: Simon Cowell is a wonderful writer. Second of all: he does not treat Orson reverentially - although he obviously thinks he was a genius. It's not a book by a fanboy - he is quite willing to look at how difficult Orson was, and how lacking in self-knowledge in some respects.

But most of all: because Simon Cowell is an actor - he writes about acting in a way that is ADDICTIVE. He analyses Orson's performances - and you just can tell that he is coming from an actor's perspective. It's NOT an academic biography - and it's sooooo cool.

It also makes me yearn for a time machine to see some of the old Mercury productions - especially Julius Caesar. And also Orson's "voodoo Macbeth" which was really his launching pad. he was 21 years old or something like that when he directed the all-black cast ... Dude was just a PHENOM.

I bet all the hardcore filmsters know when Technicolor happened. I'm not one of them, but wikipedia says it was the most widely used color process in Hollywood from 1922 to 1952. That surprised me. I seem to think of it as definitely a 1950s thing, since the 40s classics are black and white. But wikipedia also says it was mainly used for musicals and Disney animations.

Dewey, Dewey - you missed my joke! I was referring to the actual world bursting into technicolor, not the movies! I assumed, since we've long had color photography that they shot this 2006 film in sepia because that's the way it looked during that period in history. Hardy-har-har.... Okay...bad joke. Bad and obscure.