Inveterate wordsmith and drinker Hayden Carruth was born in 1921 in Connecticut U.S.A. He lived most of his adult life in Vermont, teaching and writing something like thirty books of poetry and criticism. His poems can observe the hardships of rural life, ruminate on his skepticism, or express his politics. He is capable of an as effusive an elegy as anyone but I feel like he's celebrating that place or that life "as it was" - no romantic he. He is a self described "pessimist and grump." His poems are unsentimental, the forms are simple and have jazz influence, his diction plain, his tone curmudgeonly, you can hear the gravel of drink and the lilt of New England in his voice. Here is a frank portrait of him done for the University of Chicago Magazine. A little excerpt:

Writes Pulitzer-winning poet Galway Kinnell, “More than in the case of any other poet, Carruth responds to Whitman’s words: ‘I was the man, I suffer’d, I was there.’”

For Carruth struggle has been the stuff of life and poetry. “If you’ve got any courage and any sense of responsibility, you’ll do what you have to do,” he observes. “I don’t give myself any extraordinary credit for that. But the difficulties were there and the difficulties made my poetry better. I’m convinced of that.”

I'll include some earlier poems and some from his more recent Doctor Jazz - which feels to me like a departure - including a section called The Afterlife, a section on Basho the Japanese poet - the first poem is from that set - I think it is wickedly funny, another set he calls Faxes, and an impressive elegy to his daughter, whom he has outlived. I adore the poem Scrambled Eggs and Whiskey. 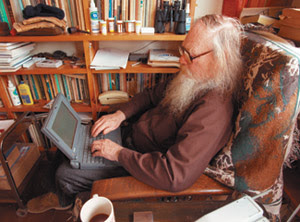 
The Way of the Coventicle of the Trees

Words in a Certain Appropriate Mode

I don't think I can resist giving you some of Dearest M - . It's a sixteen-page elegy Carruth wrote for his daughter. Here's just a little bit:

Thank you, Andrew. It was nice to discover your site as well.