A lovely catch-up session with Sheila last night in our fun, noisy, current favorite Morrocan-French cafe, which meant I was near Three Lives Booksellers and I could pick up some reading for my trip. I swore I would only leave the shop with two books. I guess you could say I was good to my word...twice. 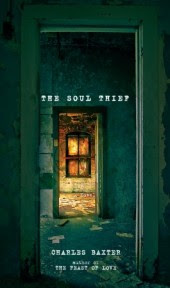 I have really enjoyed Charles Baxter's other work, Shadow Play is a particular favorite but The Feast of Love is pretty great too. And then Scott Pack's big mouth went on and on about him and I discovered he had a new one out - The Soul Thief. A prodigy who steals others' souls because he has none himself! Sounds intriguing.

So many authors I like have new books coming out. Ethan Canin has a new book coming, but sadly it was at not at the shop yet, and I've read quite a bit about the newish Rose Tremain, but that isn't available in the U.S. yet, so I'm going to pick it up when I'm in London.

Tim Winton's Cloudstreet is in my top ten - what a magnificent book. So I am loyal and when he has a new one I'll always get it as soon as I hear about it. Breath is a surfer's coming-of-age story, but it's not so much the subject that has me interested - Winton is an observant and bleak psychologist.

Andrew Sean Greer's The Story of a Marriage has been everywhere lately, I think I heard about it from Mark Sarvas. In it, a mysterious stranger visits the home of a 1950s American couple and, upsets the understandings upon which their lives were built. It is told from the point of view of Pearlie, the wife. I found Greer's The Path of Minor Planets quite a beautiful book (I think it was his first) so I am looking forward to this one.

Last, but definitely not least, Joseph O'Neill's Netherland, has been raved about as the tragedy you didn't know you were missing. Falling under the post-9/11 niche, it concerns a transplanted New Yorker who, after his marriage falls apart, discovers the world of cricket. Cricket is not exactly a New York mainstay, but the Times lets it be known that there is a culture here in New York - it was profiled recently in connection with this book. That's hardly what the book is about but it is the backdrop against which the character's loss is played out.

Don't forget, if you're near NYC Sasa Stanisic is giving a reading from his new book How the Soldier Repairs the Gramophone this Friday at McNally Robinson. If you're nowhere near NY it looks like he will be in San Francisco too and maybe his tour will swing by wherever you live. If it doesn't - read this book in any case - here's my rave.

I am so hungry for good reading right now, and with our big trip and a six-hour plane ride fast approaching, I'll have some time, now I've just got to get rid of this pesky sinus thing that keeps hanging around.

Email ThisBlogThis!Share to TwitterShare to FacebookShare to Pinterest
Labels: books

I just read the Andrew Sean Greer (I'm reviewing it for the British newspaper The Independent).

I honestly can't see what the redoubtable Mr Sarvas saw in this mawkish, overwritten tranche of cliche.

It is one of those novels that ticks all the right boxes, but is smug and self-consciously pleased with itself throughout.

It will be widely praised and no doubt win many prizes...

Mark - Wow - strong reaction(which I like.) I am wary of the 1950s American - economic idyll during the Cold War formula - it has become so common in film. Like every film Julianne Moore has done in the last 10 years. But I liked Greer's first book (didn't read the second) so I'm going to give it a shot.
Is your review coming out in this weekend's Independent? If so, I'll try to pick up a copy - I'll be in London Sunday.

A couple good reads are The Future of Love by Shriley Abbott (set in NYC), and Letter From Point Clear by Dennis McFarland.

The Soul Thief sounds very intriguing. I might as well take your list to the bookstores with me! Have a fun and safe trip!

Thanks for those ideas, Matt. I read your post on Letter from Point Clear. Once I'm back in town I will check them out!

Actually, as I've said to some other folk, the book IS "Far From Heaven"!! Just because FFH is better than, say, "Dude, Where's My Car?" doesn't make it art, FFS!! I feel very similarly about "The Story of a Marriage".

Dunno when it will be in the Indy, but very, very much doubt it will be this week ...

Mark
I think there is a superficial attraction to that period, I felt this about FFH, somehow that era is thought to be distant enough to make repression and fear pretty or funny or funky. Let me know when your piece comes out, I'll check it out on line.