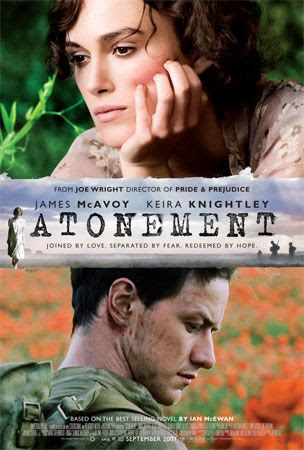 Joe Wright's film of Ian McEwan's Atonement is pretty near as good as an adaptation can get. ***SPOILER ALERT*** He successfully captures the non-linear flow of time so that you feel it's logic, feel the fact that a writer is working and re-working her material. Before seeing the film, I thought the casting of James McAvoy an odd choice. He seemed physically wrong for the part, more delicate than I imaged Robbie, but his acting is so free and passionate it didn't matter what he looked like. He is the opposite of Keira Knightley who seems incapable of acting when she is not speaking - she can let you know what she's thinking only when she's saying it or deliberately giving you a physical demonstration - a calculatedly worried glance, a swift turn of the head. While the inner life simply flows from McAvoy and he could be doing anything - or nothing at all. It is all there. And it's a treat that the film features not just one, but two such performances. The other from the beautiful Vanessa Redgrave - such openness, so many layers to her one short scene at the end of the film - but it is worth waiting for. The other highlight of this film was the soundtrack which was a brilliantly layered dream-like score combining tasteful music choices (even though the recording of La Boheme was anachronistic, it was still a great choice), with composed music that deftly interwove key sounds of the action (such as the sound of the typewriter) into the music. A really inspired and artistically integrated choice. The film really skirted tired choices even when it chose tried and true techniques - for instance, the scene at Dunkirk, there was a lengthy set to music. I'm usually disappointed when a montage begins and I roll my eyes in anticipation of a string of cliches. Now the filmmaker has to get in a bunch of information for which he didn't end up having enough time, I think. Not here, the same good writing, intelligent camera work, sense of design, excellent music went into that choice as went into every other part of the film. OK, actually, I watched the scene again. It's not a montage at all. It's a lengthy steady-cam shot which makes it even more technically remarkable. It gives the scene an emotional legato (the musical term used when notes are sustained, not sharp, and flow one into the other) - the emotion can run through the scene for the actor, rather than chopping up their experience (and hence our's). It creates this monumental sweep that is almost hallucinogenic. We're seeing Dunkirk ostensibly through Robbie's eyes (though really through Briony's) and he is feverish at this point, so that crazy carnival feel is very fitting and the overall effect of the scene very moving. There are two parts of that sequence that stay with me most, the first is a group of British soldiers singing in some sort of gazebo as the dazed Robbie circles them, although as is usually true with the soundtrack, that singing is layered in with other sounds, juxtaposing the feverishness of his experience, and of war in general, with the elemental sound of these stalwart soldiers singing. The second is as Robbie stumbles about for some place to rest, he ends up walking through a movie theater behind the screen during a film. He stands and watches the lovers kiss and that seems to knock the remaining wind out of him emotionally. Finally, the film reminded me what a great book Atonement is. Particularly after having a discussion with my friend, The Quiet One, today about what he called "the two endings." I love the two endings because they are so revealing of Briony's character - how her desperate human need to put things right ends up being translated into writing. How this was her one book and it took her whole life to write. How the "truth" required not one ending but two and how unlivable her truth was to her. She needed the artifice to survive. I didn't remember thinking Briony quite as pathological when I read the book, but is has been a few years - and the choice works for the film. I really wanted to kill her. I couldn't have any other feeling for her until encountering the elderly Briony as played by Vanessa Redgrave. In any event, I'm very enthusiastic about this one - the book is a stunner and you shouldn't miss it - but the film is a gorgeous piece of work in its own right.
Posted by Ted at 11:11 PM

Email ThisBlogThis!Share to TwitterShare to FacebookShare to Pinterest
Labels: film

I haven't seen this film yet (though I plan to) but I loved the book. I might read it a second time, soon.

I thought the film was excellent, too. It's one I want to own, but it's not one I can watch over and over (though beautifully done) as the war scenes are a bit hard going. I need to reread it now, too.

Dewey - The film has tempted me to re-read the book as well!

Danielle - I think I'm going to watch the film a second time before it goes back to the library. It is just beautiful - isn't it?

i've read the book and think it's of the best books i've ever read in my life.. now i'm in fear that if i watch the movie (which i know is good), i'll be totally be underwhelmed because i like the book version so much :(..